Last year, along with several of my colleagues at the Center, we published a paper in the journal Contemporary Jewry that reported, contrary to the conventional wisdom, that American Jews’ emotional attachment to Israel was not declining. Rather, according to the annual surveys conducted by the American Jewish Committee since the mid-1980s, the level of attachment had held fairly steady—or slightly increased—over the past quarter century. As often occurs when conventional wisdom is upended, our paper elicited challenges from skeptical colleagues.

In a new article, to be published in the next issue of Contemporary Jewry (and now available on-line), we report on the fruits of these efforts. We identified four pairs of national and local community surveys conducted between 1990 and 2005. Conducted at ten-year intervals, these pairs of surveys asked identical questions about emotional attachment to Israel and used survey samples that included Jews-by-religion and Jews-not-by-religion. With these data in hand, we could double-back on the question of American Jews’ emotional attachment to Israel and address the challenges posed by our critics.

A summary of the key findings can be seen below.  Although the available data are not as comprehensive as we would like, our findings are clear and confirm the previous study: Over the past quarter-century, the emotional attachment of American Jews to Israel did not decline and age differences in surveys reflect the dynamics of lifecycle rather than generation.

We are now focused on the future. We are currently in the field collecting data for the third wave of our longitudinal study of the “Birthright Israel” generation study and look forward to reporting how the current cohort of Jewish young adults is changing as many make the transition from young adulthood to settled adult lives.  This year, we will in particular be examining how our respondents’ views about Israel have developed in recent years. We look forward to reporting what we learn in a future issue of Constructs. 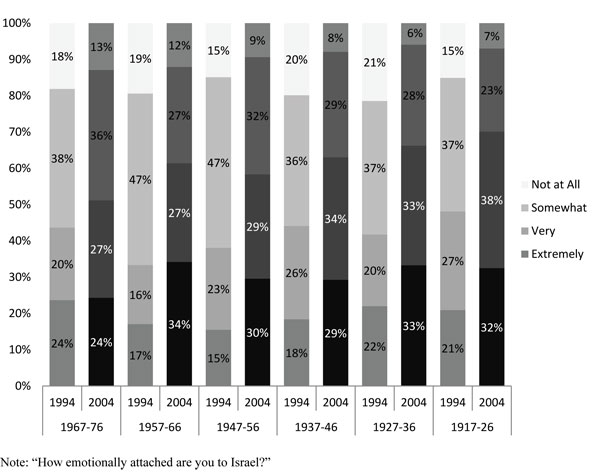 These four pairs are the only ones we could locate that meet the criteria for inclusion in the study: All four pairs include Jews by religion and Jews not-by-religion; all were conducted at significant intervals; and all employed identically worded questions about Israel.

Three patterns were remarkably consistent across all four pairs of surveys.

2. Emotional attachment increased over the lifecycle during the 1990s and 2000s. Statistically significant increases occurred as the age cohorts of young adults (in the 1990s) matured into middle age (in the 2000s).

3. The younger age cohorts appear to be more attached to Israel than decade-older cohorts were at the same age. Although not always statistically significant, these findings suggest that Israel attachment may be increasing across the generations.

Overall, these findings confirm the previous analysis of American Jewish Committee surveys (Sasson, Kadushin, and Saxe 2010) but this time in an additional four pairs of surveys and including Jews-not-by-religion.