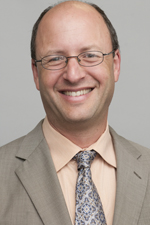 The study’s authors, Steven Cohen, Jack Ukeles and Ron Miller, interpret the study’s findings to be consistent with Cohen’s broader claim that attachment to Israel is declining across the generations among non-Orthodox Jews, primarily due to intermarriage. A careful review of the evidence presented in the study report, however, suggests the possibility of an alternative interpretation.

1. The report claims that among non-Orthodox Jews emotional attachment to Israel rises with age (p. 146).  However, as the authors acknowledge (and show in Exhibit 4-23, reproduced below), attachment is higher in the 18-34 than in the 35-49 age group. (Because the study reports data for the 18-34 group separately for those who live with a parent and those who live independently, we need to estimate a bit to see this: The 18-34 year old respondents who live with a parent are much more likely than their older counterparts to feel very much attached to Israel: 37 versus 25%; the respondents who live independently are one percentage point less likely: 25 versus 26%.)

From the New York Community Study:

The finding that the youngest age group is more attached than the adjacent group echoes the CMJS 2010 national survey (see below). We attributed this somewhat surprising observation to increased travel to Israel among younger American Jews—a result of the launch of Birthright Israel in 1999. In the New York study, as well, we see that Jews in the 18-34 age group were more likely to have visited Israel than Jews in the 35-49 age group.[1]

From the CMJS 2010 National Survey: 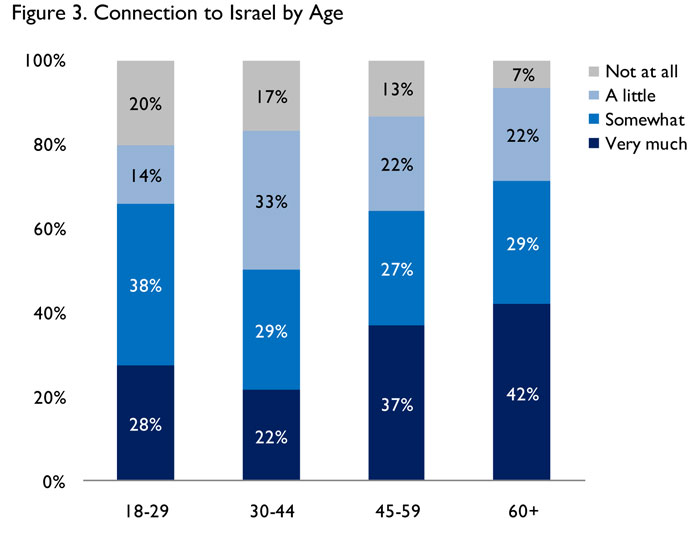 2. The report claims that the overall tendency of non-Orthodox younger respondents to feel less attached than older respondents cannot be adequately explained by their “relative detachment from collective Jewish identity” (p. 147).  Yet the report’s Exhibit 4-23 shows that both feeling attachment to Israel and feeling attachment to the Jewish people increase in comparable fashion among respondents age 35 and over.  (Among respondents under age 35 the variables track differently for respondents who live at home with a parent and those who live independently.) Moreover, in the next section of the report, the authors write:

A more detailed inspection of how individual Jewish-engagement items vary by age provides insight into precisely how older and younger Jews differ… [T]he steepest declines are associated with Jewish charitable giving; feelings of attachment to being Jewish, the Jewish community, and Israel; and social connections with other Jews. In broad terms, younger Jews are more detached from other Jews and Jewish life, in terms of both their interactions and their feelings… (p. 153)

In short, as the authors acknowledge, emotional attachment to Israel varies by age together with other measures of engagement with Jewish life. Younger respondents’ “relative detachment from collective Jewish identity” may therefore be a very good explanation for their comparatively lower level of attachment to Israel.

3. The report claims that a rising rate of intermarriage is “a major reason for the drop in Israel attachment” among the non-Orthodox young (p. 148). Note, though, that the study does not show a “drop” in Israel attachment among the young.  Rather, it shows a modest, inconsistent correlation between age and emotional attachment to Israel. In the one place where the report addresses the question of trends over time it is to describe a “line of research dating back to the early 1980s” showing younger Jews less attached (p. 146).  In other words, the authors appear to acknowledge that the historical data show that younger Jews have always (since the early 1980s which is as far back as our data go) been less emotionally attached to Israel.  There has been no “drop.” (In fact, the finding that non-Orthodox Jews 18-34 are more attached than those 35-49 suggests the opposite: an increase!)

Here is how I would interpret Cohen, Ukeles and Miller’s evidence concerning emotional attachment to Israel among non-Orthodox respondents:

[1] Again, as above, because the study reports data on the 18-34 age group separately for those who live with a parent and those who live independently, I am left to estimate the overall figures – in this case for visits to Israel.  The 18-34 respondents who live independently were substantially more likely to have visited Israel than their adjacent 35-49 counterparts (42 versus 34%).  The 18-34 respondents who lived with a parent were slightly less likely to have been to Israel (31 versus 34%).