We are very pleased to announce the release of our latest report Living on the Edge: Economic Insecurity Among Jewish Households in Greater Rhode Island. Below we interview Fern Chertok, principal investigator of the study and research scientist at CMJS.

Can you tell us a little about the impetus for the study?

Rhode Island families, including Jewish households, were especially hard hit by the 2008-2011 recession and, even in the face of a modest improvement in the economy, many face continued economic hardship.  Rhode Island still has among the highest rates of unemployment in the nation.

Rhode Island is also home to the oldest surviving synagogue in the United States and its Jewish community has a long history of helping each other dating back to the 1870s with the founding of the  Ladies Hebrew Benevolent Association. Following in this long tradition of assisting members of the Jewish community in difficulty, the Jewish Alliance of Greater Rhode Island is now facing a host of tough decisions about how and where to best deploy its resources to address economic needs of Jewish households. The Alliance sought the assistance of CMJS to conduct research that would aid their understanding of the economic challenges and needs of Jewish households in the Alliance’s catchment area communities.

What is “living on the edge” How did you define economic insecurity?

We used the term “living on the edge” to describe the economic reality of the substantial group of families that stretch to meet their basic living costs and don’t earn enough to create their own safety net of personal savings that they can employ in the case of an emergency expense.  Even modest unexpected costs can topple the economic stability of these households. 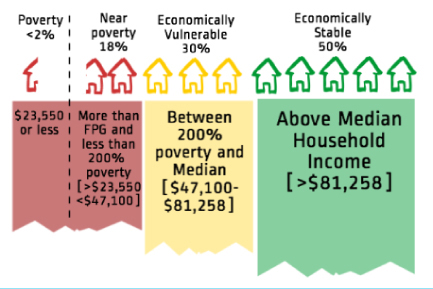 Which finding surprised you most?

Perhaps the most surprising and alarming finding was the precarious financial situation of the large group (30%) of economically vulnerable households.  These households earn as much as the median income for the state, we think of them as middle class, and yet they still face significant economic instability.

To explore the financial reality of families we created expense portraits that included the costs for housing, food, transportation, childcare, and health. Our analyses show that in most communities, even families earning the median income have to “stretch” to meet even their basic expenses. And these basic costs do not include property taxes, student loans, prescription medicines, medical co-pays, school supplies, clothing, or contributions to savings, retirement, or college funds.

With limited or no surplus each month, the economic stability of these households can change month to month.  Even modest unexpected expenses such as car repairs, replacing a household appliance or the loss of hours at work can push these households into debt or delinquency.

You made a number of specific recommendations. Can you talk about a couple of those?

Economic insecurity is not a uniquely Jewish problem however the community’s approach should embody Jewish values and traditions such as preserving the dignity and communal engagement of those in need.  Our suggestions were for strategies to both bolster the communal safety net and just as critically to prevent families from slipping into financial difficulty.

For example, we suggested that there be a community-wide effort to create new frameworks for teaching the “torah” of assistance. This might take the form of rabbinic messages from the pulpit and educational units in supplementary and day schools.  The twofold message to be conveyed is that contributing to the support of those in need is an integral and ongoing part of Jewish life and, just as importantly the receipt of help does not make one a less valued and welcome member of the community.

From a prevention standpoint we suggested that the Jewish community secure career planning and job search services to assist under- and unemployed individuals to find more and better compensated work.

We also suggested that the Alliance develop a Chevre (Fellowship) Fund for meeting the immediate, short-term needs of Jewish households facing economic turbulence. If you need money to fix your car so you can go to work or to replace a broken faucet so you can stay in your home, there should be a way to get it quickly. The proposed fund would be structured in a manner that encourages the participation of individuals from all income levels which will spread buy-in and ownership throughout the community and lower the psychological barriers to receiving help.