Background: Our study draws on a sample of approximately 2,7000 respondents and in-depth interviews with 27 children of intermarriage in four cities. We compared children of intermarriage and children of inmarriage to identify which experiences and relationships are most likely to result in robust Jewish attitudes and practices in adulthood. The central finding of the study was that participation during college in Birthright Israel, campus groups such as Hillel and Chabad, and/or taking courses focusing on Jewish topics was life-changing in terms of respondents’ Jewish engagement. At the same time, participation in Jewish life during college was related to childhood experiences. As part of the study, survey respondents were asked open-ended questions about who had the greatest influence on their religious identities when they were growing up, and in what ways. About one-fifth of children of inmarriage and intermarriage mentioned grandparents as an important adult influence. We decided to look into this relationship further.

In interviews, children of intermarriage explained their relationship with their Jewish grandparents:

My grandma was the real matriarch of my father’s side of the family and she brought the whole family together…and she would cook for…all the major high holidays, so we were at Grandma and Grandpa’s house a lot in the fall. (Female, 30, father Jewish)

I came to understand what Judaism meant through phone calls with my grandmother. That happened typically once every three months or so. (Male, 33, father Jewish)

When I was at my grandparents’ [home], on my dad’s side [Jewish] we would go to services on Fridays. (Female, 28, father Jewish)

In our survey, respondents were asked how close they were to their grandparents while growing up. For children of intermarriage, being “very close” to Jewish grandparents was an important predictor of a variety of Jewish attitudes and behaviors in young adulthood, including celebrating Rosh Hashanah and Passover, attending Jewish religious services, feeling connected to Israel, identifying as Jewish by religion, and believing it is important to marry someone Jewish, and raise Jewish children. This positive relationship between closeness to Jewish grandparents and Jewish attitudes and behaviors in young adulthood persisted even when we statistically controlled for childhood and college experiences and for the gender of the Jewish parent.

However, children of intermarriage—especially when the father was the Jewish parent—were less likely than their counterparts with two Jewish parents to have had a close relationship with Jewish grandparents while growing up.

In interviews, children of intermarriage with maternal grandmothers elaborated on the role they played in their lives:

It was really, really important for my grandmother [Jewish] that we be raised Jewish. It was just something that she felt very strongly about. (Male, 26, mother Jewish)

My extended family on both sides were more actively religious than my nuclear family so when grandma came over there was more of a Jewish feel to it. (Male, 25, mother Jewish)

Policymakers should consider how we can leverage the influence of Jewish grandparents to increase the likelihood that children of intermarriage will have Jewish experiences when growing up. In addition, while unanswered by our study, the community should examine what role Jewish grandparents can play in supporting the Jewish journey of those who engage with Birthright Israel and other Jewish educational programs. 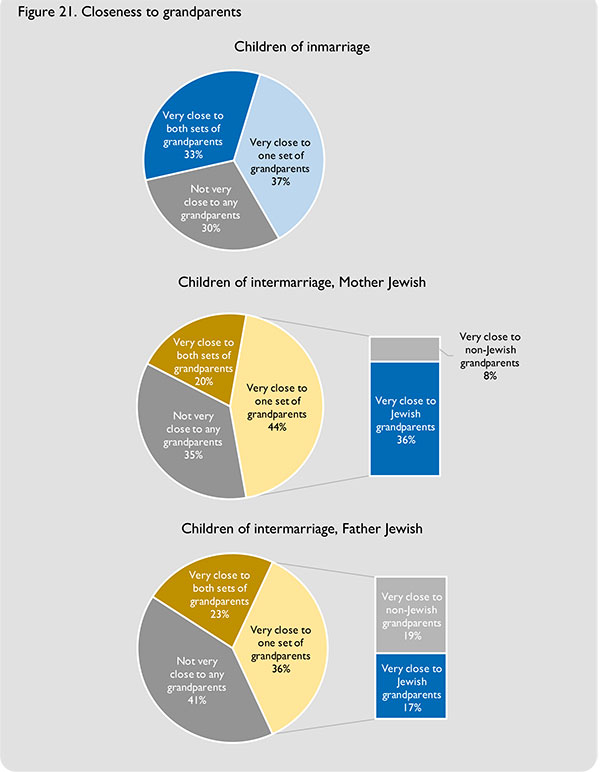 1 thought on “Grandparents and Jewish Identity”