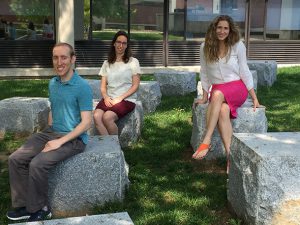 It’s time to bid a fond farewell to three research specialists, Ariel Stein, Sarah Meyer, and Viktoria Bedo, who are moving on to new adventures. Before they depart, we want to tell you a little more about them and what they have been up to.

Ariel Stein grew up in the Orthodox community of Baltimore, MD. He studied psychology and Jewish studies at the University of Pennsylvania. A former research specialist and college classmate of Ariel’s, Dina Bleckman, mentioned her work at CMJS and suggested he apply. While at CMJS, Ariel worked on a number of projects, in particular those focusing on program evaluation, Israel education, and young adults. Ariel notes he has gained professional skills in a number of areas: study and survey design, analysis, and interviewing. In addition to his work here, Ariel is also the co-creator and editor-in-chief of the Jewish Literary Journal. Ariel is moving with his fiancée to Los Angeles.

Sarah Meyer is originally from New York, and moved to Boston from Washington, DC. After studying public policy and Arabic at Cornell, she taught middle school math in Prince George’s County, Maryland as part of Teach For America. Looking to gain experience in research, she came to work at CMJS after first learning about it from a Brandeis graduate student. Her work at CMJS focused on developing and fielding surveys.The projects she worked on primarily focused on young adults through the lenses of Birthright Israel and Jewish camps, but she also worked on the Boston Jewish Community Study. After two years at CMJS, Sarah will be starting graduate school in clinical psychology, combining her direct service work she did as a teacher with the research skills she developed at the center.

Viktoria (Viki) Bedo grew up in Budapest, Hungary and first came to the United States in high school, spending her junior year in Seattle. After finishing high school in Budapest, she studied at the Conservative Yeshiva in Jerusalem for two years. Viki attended Brandeis University, where she majored in Globalization Studies and Near Eastern and Judaic Studies. She worked at CMJS throughout her undergraduate years, and made the transition to work at the center full time after graduation. At CMJS, Viki worked on the Jewish Futures Project and a study of Jewish philanthropy. She honed her research and communication skills and especially loved working  with students and respondents. Viki will be attending the Rabbinical School at the Jewish Theological Seminary. She believes her work at CMJS will provide her an important sociological perspective in her future work as a rabbi.

We shall miss Ariel, Sarah, and Viki and wish them all the best in their future endeavors!