The eukaryotic genome is compacted into chromatin, which is formed by its functional unit, the nucleosome. Nucleosomes are made of DNA wrapped around histones and they are tightly bound together to fit inside the nucleus. Without chromatin, the eukaryotic genome would not be organized into chromosomes and would not be able to fit inside the nucleus. Although it is important to keep DNA compact and easily kept in the nucleus, it is also important to remove it from histones to perform important cellular processes such as replication, repair, and transcription. Histone chaperones are key players in the eviction and deposition of histones during these processes. This review will focus on histone chaperones that are essential for histone eviction and deposition at the replication fork during S phase.

Eukaryotic organisms carry genomic information within the nucleus of a cell in the form of chromatin, which is comprised of repetitions of its functional unit, the nucleosome (13). Nucleosomes are made of DNA wrapped around histones, specifically a histone octamer made of two H2A-H2B dimers and a (H3-H4)2 tetramer (13). Packaging DNA into chromatin occurs with the assistance of histone chaperones (5). Like their namesake, histone chaperones escort histones within the nucleus to aid in chromatin assembly and disassembly (5). Although histone chaperones aid in histone transfer, they are not part of the final nucleosome product (10). Chromatin remodeling plays a key role in many cellular metabolic pathways such as DNA replication, DNA double-strand break (DSB) repair, and transcription (10).

Chromatin modification via histone chaperones has become a topic of great interest recently in the molecular biology community. DNA replication is an essential part of the cell cycle and if it is not working properly, the cell may arrest and eventually signal for apoptosis (7). Because damage can occur during replication, it is crucial for the proper machinery to arrest the cell and activate the checkpoint, recruit repair machinery, repair the DNA, and deactivate the checkpoint to continue in the normal cell cycle (7). As it’s been stated before, histone chaperones play a crucial role in all of these pathways. Understanding these pathways may lead to the understanding of human diseases, such as cancer (5). Histone chaperones and their associated targets have the potential for new discovery of cancer causing pathways and are being studied greatly in the molecular biology community (5).

During S phase, histones are almost exclusively canonical, which are the types of histones that are incorporated into chromatin during replication (1). Replication-independent histones, which are called histone variants, are usually expressed throughout the cell cycle (1, 2). The main difference between canonical histones and histone variants is that the genes encoding canonical histones do not have introns and their mRNAs are not polyadenylated, while histone variant genes contain introns that undergo splicing (1). H2AX and H2AZ are the most common histone H2 variants and they are mainly seen in repair pathways (1). Human H3 has three variants, which are H3.1, H3.2, and H3.3. H3 and H3.2 are replication-dependent and are deposited onto newly synthesized DNA during S phase, while H3.3 replaces H3 or H3.2 during transcription and H3.1 is usually seen at the site of DNA damage (9). The slight variations in histones and their variants lead to different binding affinities of different histone chaperones (5, 9). For example, Chromatin assembly factor-1 (CAF-1) binds to H3-H4 and H3.1-H4 while histone chaperone antisilencing function 1 (Asf1) binds to H3.1-H4 and H3.3-H4 (Table 1) (9, 5).

The (H3-H4)2 tetramer is normally deposited onto newly synthesized DNA during S phase by the evolutionarily conserved protein, CAF-1, which is composed of three subunits in mammals and yeast (14). Human CAF-1 is composed of subunits p150 (largest), p60 (middle), and p48 (smallest) while the yeast orthologs are Cac1, Cac2, and Cac3, respectively (14). CAF-1 is known to interact with H3.1, which stimulates histone deposition coupled to DNA synthesis in a process termed replication-coupled nucleosome assembly (13). It has been shown that deletion of the p150 subunit slows down DNA replication, deletion of p60 triggers apoptosis in proliferating cells, and overexpression of p60 is often present in different cancers (9). It has also been shown in yeast that Caf1 mutants contain longer Okazaki fragments, which suggests that Caf1 is involved in lagging strand synthesis (5, 9). Chromatin remodeling factors have been shown to stabilize or destabilize histone – histone chaperone interactions (15). For example, acetylation of lysine 56 on H3 (H3K56ac) by histone acetyl transferases (HATs) CBP or Gen5 in humans has been shown to increase the binding affinity of CAF-1 with H3-H4 and facilitates replication coupled nucleosome assembly (11, 15). 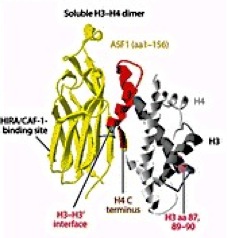 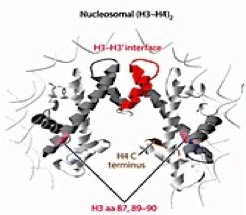 Asf1 is the most conserved histone chaperone among eukaryotes (12). Most vertebrates have two paralogs of Asf1, Asf1a and Asf1b (12). Asf1a has been shown to have a greater affinity with histone regulator A (HIRA), which is useful in transcription, while Asf1b selectively interacts with the p60 subunit of CAF-1 (5, 12). A current model proposes that Asf1 works ahead of the replication fork by binding histones from disrupted nucleosomes going through replication and behind the fork delivering dimers to other histone chaperones (5). It has been shown that deletion of Asf1 in human cells results in cell arrest in S phase and eventually apoptosis, suggesting that this is a key protein involved in replication and cell cycle progression (9). Asf1 binding to H3-H4 dimers has been said to prevent tetramerization due to the way it binds H3 (5). Crystal structures of Asf1 bound to H3-H4 have shown that this interaction interferes with H3 binding to another H3 molecule (Figure 1) (5).

Nucleosome assembly at the replication fork

The current model of chromatin assembly at the replication fork is that H3-H4 dimers are first bound to Asf1, which promotes acetylation of H3K56 (2). H3K56ac has been shown to decrease the binding affinity of Asf1 to H3 so it can be transferred to CAF-1 (11, 14). This was observed by co-immunoprecipitating (Co-IP) acetylated K56 H3 with Asf1 and CAF-1, in which CAF-1 binds more of the H3K56 than Asf1 (11). Furthermore, mutation of H3 at K56 to an arginine (K56R) decreased the acetylation of H3 at this residue due to the inability to acetylate an arginine, and resulted in Asf1 binding more H3 than CAF-1 (11). This provided evidence that H3K56ac is necessary for replication-coupled nucleosome assembly (11). The process of Asf1 dissociating H3-H4 and CAF-1 binding to H3-H4 is mediated by a direct interaction between Asf1 and p60 (middle subunit of CAF-1) (14). CAF-1 then promotes tetramerization (5) and loads H3-H4 tetramers onto nascent DNA via an interaction with the processivity clamp, proliferating cell nuclear antigen (PCNA) at the replication fork (15). RFC, the PCNA clamp loader, is thought to also be necessary for replication-coupled nucleosome assembly (9). It has been shown that RFC is required for H3-H4 deposition onto nicked DNA (9). The histone chaperone NAP1 (nucleosome assembly protein-1) is responsible for H2A-H2B dimer deposition at the replication fork, and has been shown to suppress nonspecific contacts between H2A-H2B dimers and DNA (9). Deletion of NAP1 in yeast accumulates H2A-H2B-DNA complexes, which can deregulate gene transcription (9). The CAF-1, Asf1, NAP1 pathway is simplified in Figure 2. 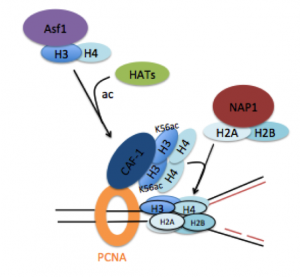 The histone chaperone FACT consists of two subunits, Spt16 and SSRP1, and has been known to promote transcription via histone H2A-H2B eviction (6). Recent data has provided evidence that FACT binds to the DNA helicase, MCM, and facilitates replisome progression while also aiding in H2A-H2B deposition onto newly synthesized DNA (6). Much of the H2A-H2B deposition is still unknown, but it is theorized that H2A-H2B dimerizes quickly after (H3-H4)2 is deposited onto newly synthesized DNA and then is deposited by FACT via binding through the Spt16 subunit to H2B, while NAP1 binds H2A (5). The human CUL4-DDB1 ubiquitin ligase complex ubiquitylates various proteins involved in DNA replication and chromatin dynamics and has been said to be linked to Asf1-H3-H4 dissociation (5). The yeast ortholog of CUL4-DDB1, Rtt101-Mms, has been shown to ubiquitylate acetylated H3K56 (H3K56ac) to promote Asf1 dissociation from H3-H4 and CAF-1 association with H3-H4 (5). It is unknown if this process occurs in human cells.

Helicase MCM has been shown to act as a histone chaperone

The Mcm2-Mcm7 complex is the most common replication helicase (4). This complex aides in unwinding DNA so that it can be replicated and is believed to be a part of the initiation and elongation step of replication (4). The Mcm2 subunit has been shown to interact with H3-H4 via crystal structure (13) and during replication, this interaction assists in the disassembly and assembly of nucleosomes (4, 14). Mcm2 is thought to be a crucial part of (H3-H4)2 eviction during the initiation of replication (14) and furthermore, dissociates the tetramer to bind H3-H4 dimers, similar to Asf1 (4). Both Mcm2 and Asf1 interact with H3-H4 dimers, which forms a 1:1:1:1 heteromeric complex (4). This data provided some more insight as to how Asf1 prevents tetramerization of H3-H4 during S phase.

To summarize the basic point of replication-coupled nucleosome assembly, one must start with the unwinding of DNA from its nucleosomal structure. To do so, histone chaperones and other chromatin remodeling proteins are needed to remove histones and free the DNA for the replisome to bind and initiate replication. Replisome proteins, such as the DNA helicase Mcm2-Mcm7, can unwind DNA to allow for proper replication. As it has been shown, some parts of the replisome, such as Mcm or PCNA, are needed to bind histones and histone chaperones in order to evict or deposit histones. The eviction of histones is a key step in the initiation of replication and the deposition of histones on to newly synthesized DNA is a key step in termination of replication.

The accepted model for the Asf1-CAF-1 pathway for H3-H4 depostion is that Asf1 binds H3-H4 dimers and prevents tetramerization of H3-H4. Once Asf1 is bound, it promotes acetylation of the K56 residue on H3 to promote CAF-1-H3-H4 interactions. Binding of CAF-1 to H3-H4 promotes tetramerization to form (H3-H4)2. CAF-1 can bind the PCNA sliding clamp and deposit (H3-H4)2 onto newly synthesized DNA. This is a key stem in nucleosome assembly. NAP1 and FACT have been shown to be key histone chaperones in the H2A-H2B dimer deposition onto newly synthesized DNA, but the mechanisms is still not completely understood.

In budding yeast it has been known that CAF-1 is recruited to replication forks by its largest subunit, Cac1, getting phosphorylated (Cac1p) and binding to the PCNA sliding clamp (8). CDC7, a protein kinase, has been shown to phosphorylate Cac1 and promote the binding of CAF-1 to PCNA (8). Binding of CAF-1 to PCNA promotes replication-coupled nucleosome assembly by allowing CAF-1 to deposit (H3-H4)2 onto newly synthesized DNA (15). In a study using budding yeast as the model organism, another kinase, CDC28, has been shown to phosphorylate Cac1 at S94 and S515 during S phase to promote association of CAF-1 with chromatin but not with PCNA (8). This pathway has yet to be studied in mammalian cells but this information can be used to predict which mammalian proteins could be behaving in a similar way. This can lead to further studies of CAF-1’s ability to independently promote nucleosome assembly instead of PCNA aiding in CAF-1 histone deposition.

As it has been seen in research studies, deletion or mutation of many histone chaperones or replication proteins leads to genomic instability and can lead to stalled replication forks, uncontrollable cell proliferation, or programmed cell death. Studying these proteins and their pathways within chromatin assembly and DNA replication can provide insight into disease causing pathways and allow for potential new therapies.

Reviews and Questions in DNA Research