The Arp2/3 complex is a multi-component molecular machine that nucleates branched actin filament networks at the leading edge of cells to promote protrusion and at sites of endocytosis to drive membrane invagination. While the process of branched actin nucleation is now well understood (including at mechanistic and structural levels), what is less well understood is how the actin networks are subsequently debranched, or ‘pruned’. Debranching is an absolutely essential step in network remodeling and turnover, which is required for cell motility and endocytosis. The branched actin structures produced by Arp2/3 complex are kinetically stable, with spontaneous dissociation occurring only after tens of minutes to hours, whereas in vivo the branches dissociate in seconds. How is this achieved? 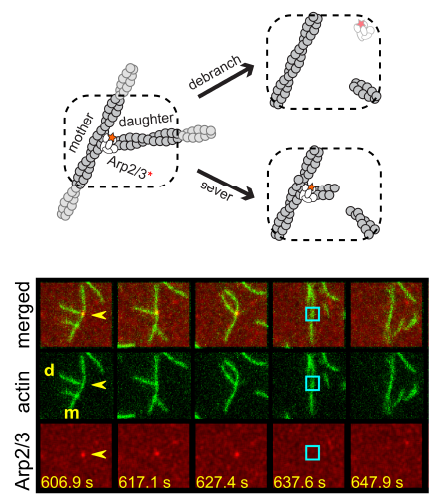 Two separate members of the larger ADF-homology family of proteins, glia maturation factor (GMF) and cofilin, have been implicated in promoting debranching. In this paper, Gelles lab member Johnson Chung, in collaboration with Jeff and with Bruce Goode from the Brandeis Biology Dept., used multi-wavelength single molecule florescence microscopy and quantitative kinetic analysis to define the mechanisms by which these proteins promote debranching.   Dr. Chung shows that “coﬁlin, like GMF, is an authentic debrancher independent of its ﬁlament-severing activity and that the debranching activities of the two proteins are additive. While GMF binds directly to the Arp2/3 complex, coﬁlin selectively accumulates on branch–junction daughter ﬁlaments in tropomyosin-decorated networks just prior to debranching events. Quantitative comparison of debranching rates with the known kinetics of coﬁlin–actin binding suggests that coﬁlin occupancy of a particular single actin site at the branch junction is sufficient to trigger debranching. In rare cases in which the order of departure could be resolved during GMF- or coﬁlin-induced debranching, the Arp2/3 complex left the branch junction bound to the pointed end of the daughter ﬁlament, suggesting that both GMF and coﬁlin can work by destabilizing the mother ﬁlament–Arp2/3 complex interface. Taken together, these observations suggest that GMF and coﬁlin promote debranching by distinct yet complementary mechanisms.”

The dynamic assembly, remodeling, and turnover of actin networks drives cellular processes
ranging from cell motility, endocytosis, and phagocytosis to cell division, cell and tissue
morphogenesis, and neuronal pathfinding. Here, we describe a new actin regulatory activity that changes understanding of how actin networks can be turned over. In a collaborative project with Bruce Goode’s lab, postdocs Shashank Shekhar and Greg Hoeprich used microfluidics-assisted total internal reflection fluorescence (TIRF) microscopy to show that mammalian twinfilin, an evolutionary conserved ADF/cofilin-homology protein, accelerates depolymerization at newly-assembled (ADP-Pi) but not older (ADP) actin filaments, even under assembly-promoting conditions (i.e., at G-actin concentrations above the critical concentration). Our data suggest that twinfilin molecules interact processively with the barbed end of the filament as it shrinks, blocking ATP-actin subunit addition while allowing ADP-Pi subunit dissociation. These novel activities of twinfilin reveal that cells have machinery that can bypass the normal filament aging process and induce the depolymerization of barbed ends as needed. These results may explain known genetic interactions between twinfilin and cofilin, and localization of twinfilin to the tips of filopodia and stereocilia, where actin filament barbed ends are clustered.

Congratulations to Dr. Shashank Shekhar, who has established his independent research lab in  the Department of Physics at Emory University, where he will continue studying the biophysics and biochemistry of the actin cytoskeleton.  We have been pleased to have Shashank at Brandeis over the past few years as a cross-departmental postdoc in the labs of Bruce Goode (Biology), Jeff Gelles (Biochemistry), and Jane Kondev (Physics).

From Science at Brandeis:

“All animal and plant cells contain a highly elaborate system of filamentous protein polymers called the actin cytoskeleton, a scaffold that can be rapidly transformed to alter a cell’s shape and function. A critical step in reconfiguring this scaffold is the rapid disassembly (or turnover) of the actin filaments. But how is this achieved? It has long been known that the protein Cofilin plays a central role in this process, but it has been unclear how Cofilin achieves this feat. Cofilin can sever actin filaments into smaller fragments to promote their disassembly, but whether it also catalyzes subunit dissociation from filament ends has remained uncertain and controversial. Until now, this problem has been difficult to address because of limitations in directly observing Cofilin’s biochemical effects at filament ends….”  Dr. Shashank Shekhar, working together with Dr. Johnson Chung and “jointly mentored by Bruce Goode, Jeff Gelles and Jane Kondev, use[d] microfluidics-assisted single molecule TIRF imaging to tackle the problem.

The new study shows that Cofilin and one other protein (Srv2/CAP) intimately collaborate at one end of the actin filament to accelerate subunit dissociation by over 300-fold! These are the fastest rates of actin depolymerization ever observed. Further, these results establish a new paradigm in which a protein that decorates filament sides (Cofilin) works in concert with a protein that binds to filament ends (Srv2/CAP) to produce an activity that is orders of magnitude stronger than the that of either protein alone.”

Branched actin filament networks formed by the Arp2/3 complex play an essential role in force production in eukaryotic cells.  Branched networks are not static components of the cytoskeleton.  Instead the times and locations of network assembly  and disassembly are tightly controlled by regulatory proteins.  Ph.D. student Siyang Guo used single-molecule fluorescence methods to show how the Abp1 protein positively regulates branched actin networks.  Remarkably, Apb1 functions by two distinct mechanisms.  The protein stimulates the formation of networks by stabilizing the binding of Arp2/3 complex to the sides of actin filaments, a precursor to branch formation.  However after branches form bound Abp1 works differently: it protects the network from GMF, the “pruning shears” protein that chops off branches during network disassembly.  Taken as a whole, the study gives deeper insight into the multiple layers of regulation that control cytoskeleton pattern formation and dynamics.  This project is part of a long-term collaboration on cytoskeletal regulation with Bruce Goode’s lab.