Breaking Research: Glycogen build-up in the brain contributes to aging

Why is the aging process accompanied by progressive cognitive decline such as impaired memory, decreased focus, and slowed reaction time? Although we don’t fully know what causes it, researchers have found that aging visibly affects the brain, most strikingly as a decrease in total brain volume due to progressive loss of neurons. As we age, it is thought that neurons are irreversibly damaged by cumulative mistakes in building proteins, copying DNA, and other processes.

Sometimes, these mistakes can cause abnormal proteins and other molecules to clump together and form dense deposits inside neurons. In many neurodegenerative diseases such as Alzheimer’s or Lafora’s disease, an excess of deposits is associated with rapid neuron death. Yet although the (albeit much less severe) accumulation of deposits in the brain is a normal part of aging, its role in cognitive decline has been historically ignored. In a new study published in Aging Cell by the Milán and Guinovart labs, researchers investigate why these deposits appear during the normal aging process and what effect they have on neuronal function. 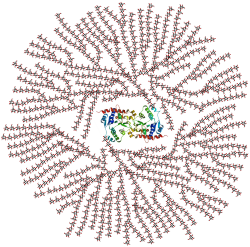 Glycogen is a storage molecule made up of thousands of branching glucose units. Image by Mikael Häggström.

Previous research has shown that the deposits present in aged human brains (which are referred to as either corpora amylacea or polyglucosan bodies; I’m just going to call them PGBs) are primarily made up of glycogen molecules, along with some other proteins. Glycogen is an important energy storage molecule in animal cells (second only to fats) and each glycogen molecule is composed of thousands of glucose units. But what causes the glycogen to aggregate and form deposits in a normal aging brain? 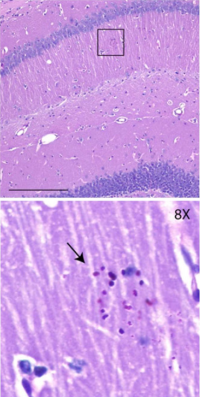 The authors analyzed PGBs in the brains of aged mice to answer this question. They first studied the composition of the mouse PGBs and confirmed that they were similar to the PGBs found in aged human brains, down to the types of proteins bound up among the glycogen molecules. Next, they created a knock-out mouse line that was missing the glycogen synthase gene, which synthesizes glycogen by attaching glucose molecules together. The authors couldn’t find PGBs in the aged brains of these mutant mice, thus demonstrating that the process of synthesizing glycogen contributed to PGB formation. This finding is admittedly unsurprising: if the cells can’t make glycogen, it’s not there to clump together.

Well here’s the interesting part! Not only couldn’t the authors find glycogen deposits, but they also didn’t see accumulation of any of other protein associated with PGBs. One of the proteins they tested was alpha-synuclein, the aggregate-prone protein involved in Parkinson’s disease. In the normal mice, alpha-synclein accumulated along with the PGBs, but there was no accumulation in the mutant mice. Thus, glycogen synthesis seemed to be a prerequisite for the formation of other protein deposits. This finding could have implications for possible treatments to slow aging—if we can interfere with glycogen synthesis, could we stop the accumulation of other damage-causing proteins and reduce the detrimental effects on the brain?

To answer that question, we’d need to first confirm that the PGBs are actually involved in the decline of neuronal function during aging. This leads me to the authors’ next set of experiments, for which they turned to Drosophila melanogaster. Because fruit flies have shorter lifespans, it’s easier to study how PGBs affect them over their entire lives. In addition, fly researchers have developed a vast array of genetic tools for their animal model, which the authors used to knock-out the glycogen synthase gene again, but this time only in the brain and only during adulthood. This allowed the researchers to study how PGB formation affects brain function without altering the development and general health of the fly (a very difficult feat in mice).

As expected, the authors found that the mutant flies had reduced levels of glycogen in the brain. But remarkably, they also found that the mutants lived significantly longer than the normal flies. And this was quality life—the aged mutant flies could climb better and faster than normal flies of the same age. Based on these results, the authors concluded that glycogen synthesis impairs neuronal function and survival with age.

The findings from this paper is a step in the right direction for figuring out why cognitive decline is associated with aging. Before this can be useful for humans, however, there are a lot of questions to answer. How and why does glycogen synthesis cause PGB formation as we age? Will interfering with this process in adulthood extend quality life and cognitive function (and can it be done safely)?  Finally, the finding that glycogen synthesis may be required for other protein deposits was completely unexpected. Future work in this field may therefore provide insights into neurodegenerative diseases associated with protein aggregation, such as Alzheimer’s disease (beta-amyloid), Parkinson’s disease (alpha-synuclein), and Lafora’s disease (glycogen!).


For more research on aging, click the “aging” tag in the right column.

For another post about how to reduce aging-related protein aggregation, check out this post about the possible use of lithium.