Breaking Research: Lithium may protect against Alzheimer’s and other aging-related diseases

As human life expectancy continues to increase at a steady rate in most countries worldwide, the prevalence of aging-related diseases is also increasing. One such example is Alzheimer’s disease (AD), the most common cause of dementia in the aging population. There is currently no cure for AD, and the only treatments that exist temporarily cover up the symptoms without actually slowing the disease itself.

Alzheimer’s disease can be identified by the abnormal accumulation of a protein called amyloid beta (Aβ) in the brain. Aβ is a byproduct of an important cellular process, and is usually cleared away by the cell’s garbage recycling processes. It’s normal for some leftovers to be missed, however, and over time Aβ builds up as we age. But in large enough concentrations—such as in older patients with AD—accumulation leads to the formation of aggregated deposits of Aβ. These deposits damage neurons and cause neurodegeneration (progressive neuron death). 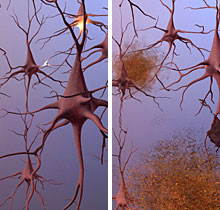 The left side shows healthy neurons. The right side shows damaged neurons and Aβ deposits as seen in Alzheimer’s disease patients. Image modified from alz.org

Eventually, this widespread brain tissue damage leads to imbalances in the levels of neurotransmitters, which are chemicals that neurons use to communicate. This imbalance is thought to cause the symptoms of AD, including problems with memory, thinking, or changes in behavior. Current treatments simply alter the amount of these neurotransmitters without doing anything to slow or prevent Aβ aggregation and neuron death. Therefore, research aimed at developing a drug that can interfere with Aβ accumulation is important for treating this disease.

Recent findings in lithium research holds hope for such a treatment. Although lithium is most widely used as a treatment for bipolar disorder, some preliminary research suggests that it might also be able to slow or prevent the symptoms of Alzheimer’s disease in humans if prescribed early enough. However, the results have been mixed and even sometimes contradictory. This is largely due to the fact that lithium’s actions in the brain are not understood, so figuring out how lithium might be helping AD patients is essential before it could be considered as a treatment. A recent paper published in Frontiers of Aging Neuroscience by the Partridge lab has begun to do just that by studying how lithium can reduce Aβ accumulation in a fruit fly model of Alzheimer’s disease.

The authors created a model for AD by introducing a mutated form of human Aβ protein known to cause AD in some families (called Arctic Aβ42) into adult fruit flies. Flies with the Arctic Aβ42 mutation displayed progressive neuron dysfunction and shortened lifespan, which mimicked the symptoms of AD in human patients. They had previously shown that lithium treatment was able to reduce the amount of Aβ (and thus also its toxic effects on neurons) in these flies. But how did it work?  In this study, they treated these mutant flies with lithium again to answer this question.

What they found was surprising. Lithium didn’t just reduce the amount of Aβ protein in the brain, it reduced the amount of all proteins.  It worked by suppressing the activity of the “translation machinery”, which refers to the system that actually assembles and produces proteins from the instructions in the genetic code. So lithium actually reduced the production of all proteins through a mechanism that wasn’t specific to Aβ.

What does this mean for the possibility of using lithium to treat Alzheimer’s disease? The fact that lithium’s effects are more general is actually pretty good news not just for AD, but for all research into the aging process. It is currently thought that normal aging is caused by the accumulation of damaged or mutated proteins that haven’t been cleaned up, and research aimed at increasing lifespan has focused on either improving the cell’s recycling processes or reducing protein production. In fact, lithium treatment has been shown to increase life expectancy in animal models, including fruit flies (and possibly even in humans!).

So if lithium can increase lifespan in animals without Alzheimer’s disease, can it reverse the lifespan reduction in the AD model flies? Yes! The authors found that lithium treatment also improved the life expectancy of their mutant flies compared to ones that did not get a lithium treatment. This result provides further hope that lithium could one day be used to actually slow the progression of AD and give patients more years of quality life.

The findings in this paper are not just promising for Alzheimer’s disease, but also for other aging-related diseases caused by abnormal accumulation of protein in the brain, such as Parkinson’s disease and Huntington’s disease. Lithium also has the advantage of already being an approved drug for treating patients with bipolar disease, so some information on side-effects and dosages already exists. Of course, this doesn’t mean doctors should begin prescribing lithium for AD patients right away; the dosage requirements will likely be different and older adults may experience other side-effects. But research in this field has definitely leapt forward, and we may see a cure for aging-related diseases in our (extended?) lifetime.