The body’s biological clock is responsible for keeping track of time and synchronizing behavior with the environment, so that you feel alert during daylight hours and sleepy at night. This biological clock (also called the circadian clock or circadian rhythms) consists of three major parts:

Researchers have made great progress in understanding how the central pacemaker works and how environmental cues can control the clock, but how does the clock signal to the rest of the body to control rhythmic behaviors? A recent fruit fly paper published in Neuron by the Koh and Wu labs investigated this question and discovered a new gene involved in signaling that it’s time to sleep.

How does our body know when it’s time to feel sleepy or alert? The biological clock must have an output pathway for controlling sleep, but the mechanism of exactly how that happens is poorly understood. After analyzing the sleep patterns of thousands of fruit fly colonies with different genetic mutations, the authors of this paper found a group of flies that had trouble falling asleep at night. They called the mutated gene Wide Awake (wake for short) and discovered that while the gene wasn’t necessary for accurate functioning of the circadian clock itself, it was important for signaling a transition from wake to sleep at the end of the day. 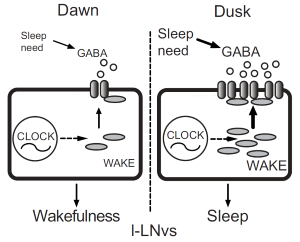 During the day, GABA signaling from sleep circuits in the fly brain has little effect on LNvs (the wake-promoting clock cells). At dusk, increased amounts of WAKE proteins in clock cells leads to an increase in the number of GABA receptors on the membrane, thus increasing the cells’ sensitivity to GABA. This dampens LNvs activity, allowing flies to fall asleep at night.

So how does this gene translate clock information into a feeling of sleepiness? The authors looked to “clock cells” to answer this question. Clock cells are a group of cells that make up the central pacemaker. In mammals, this pacemaker is located in the suprachiasmatic nucleus (SCN). In flies, the central pacemaker includes a small group of neurons called LNvs, which promote wakefulness. During the day, activity in the LNvs causes flies to be awake and active. But at dusk, the amount of WAKE protein from the wake gene in these cells increases. WAKE makes the cells more susceptible to inhibition from a chemical messenger called GABA, which dampens activity. As the wake-inducing LNvs become more sensitive to GABA, they become less active, which allows the sleep circuits in the brain to exert more control over behavior so the flies can fall asleep. On the other hands, flies with a mutation in the wake gene were not getting enough GABA signal to quiet the LNvs at night, keeping them agitated and awake. 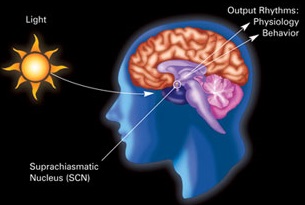 The authors identified a gene that seems to be a messenger from the circadian clock to the brain, telling it that it’s time to shut down and go to sleep at night. But how can these fruit fly findings help us humans? They also found the same gene in the SCN in mammals, suggesting that it plays the same role in other species as well. The finding that wake mutants had difficulty falling asleep after lights-off is reminiscent of sleep-onset insomnia in humans. Currently, the most common treatment for insomnia are drugs the mimic the effects of GABA in the brain. However, these findings suggest that the effectiveness of this treatment is limited if wake-promoting neurons are not sensitive enough to GABA signaling. Thus, future research in this area may focus on manipulating the wake gene and its proteins to develop a better treatment for sleep disorders such as insomnia in humans.