Binary expression system – A genetic tool that has two parts for quickly and easily inserting (and then expressing) a specific gene in a specific set of cells. One part of the tool describes where the gene will be expressed, and the other part describes what will be expressed. In flies, the fly lines carrying each part show no phenotype, but when they are mated, the offspring express the gene (the what) in a specific set of cells (specified by the where). For more information, check out this wikipedia article on the GAL4/UAS system, which is the most common binary expression system used in fruit flies.

Chromosome – Chromosomes are pieces of DNA that contains many genes stored in a linear arrangement. Genetic information is passed down through generations via chromosomes, which are inherited. For example, humans have 2 sets of 23 chromosomes (for a total of 46). One set is inherited from the mother and contains the mother’s genes, and the other from the father.

Endogenous – This term is often used to describe genes that are originally found in the genome of the organism in question, rather than having been introduced artificially.

Gene expression – In genetics, to “express” a gene means that the instructions for that gene are functional and give rise to a phenotype. Although the DNA for a gene is written in every cell, the gene might only be expressed in a select group of cells. The combination of expressed genes is what differentiates the cells in your body. For example, although brain cells and liver cells have the same genes in them, the brain cells only express the “brain genes” and the liver cells only express the “liver genes”. For more information, check out the wikipedia page on gene expression. 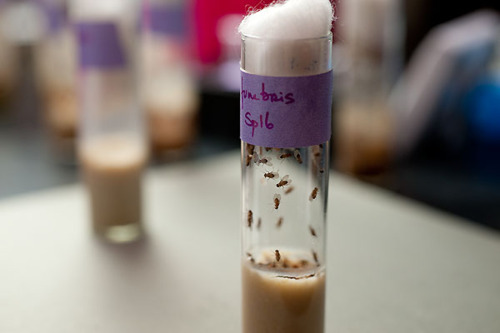 Figure 1. Fly lines are housed in individual vials with fly food at the bottom. source

Fly line – Also called a fly stock, this umbrella term refers to a breed of flies with a selected genetic mutation or insertion (or a specific combination of them). Fly researchers often have hundreds or thousands of fly lines in their labs, each one labeled with the type and location of the genetic modifications. (see Figure 1)

Knock-in – A genetic modification in model animals in which a specific gene is inserted into the genome. This technique is often used to create a disease model by inserting a mutated gene from another organism, such as a human disease gene.

Knock-out – A genetic modification in model animals in which a specific gene is permanently disrupted or inactivated. This technique is often used to determine the gene’s function by observing which physiological processes or behaviors are affected when the gene fails.

Protein – Proteins are large molecules that do most of the work inside your cells. Proteins are built from their corresponding gene’s instructions, and they drive cellular processes by interacting with each other. For example, the PINK1 protein is created from the PINK1 gene, which is implicated in Parkinson’s disease. PINK1 latches onto the surface of mitochondria to test whether or not they have been damaged. If it detects damage, it interacts with another protein called Parkin. This interaction triggers a series of events that break down the damaged mitochondria. A series of protein interactions such as this is called a “signaling cascade”.

Receptor – In biology, a receptor is a protein attached to the surface of cells. It responds to specific environmental stimuli (such as temperature, a specific chemical, or even foreign agents such as invading bacteria) and triggers an appropriate reaction inside the cell. For example, a steep rise in external temperature may trigger the cells to start shedding heat, while a receptor that recognizes an invader will trigger an immune response.

Screen – A genetic screen is a technique used to identify the gene responsible for a specific trait. There are a couple of types of screens, but the most common involves using a mutagen to induce random mutations in a population and then searching through offspring for abnormalities in the trait of interest. For example, if researchers wanted to find the “red eye” gene, they would search for offspring with white eyes, and then attempt to locate the abnormal gene in those individuals’ genome.