Did you know that fruit flies sleep? There are actually a lot of similarities between sleep in fruit flies and sleep in humans and other mammals. For example… 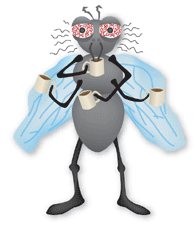 And the comparisons don’t stop there. Over the years, fruit flies have proven to be a great animal model for studying sleep, and researchers have used them to improve our understanding of why sleep is important. In fact, earlier this year a group of researchers found that young flies need sleep for normal brain development.

But, how do fly researchers actually study sleep in these tiny flies? 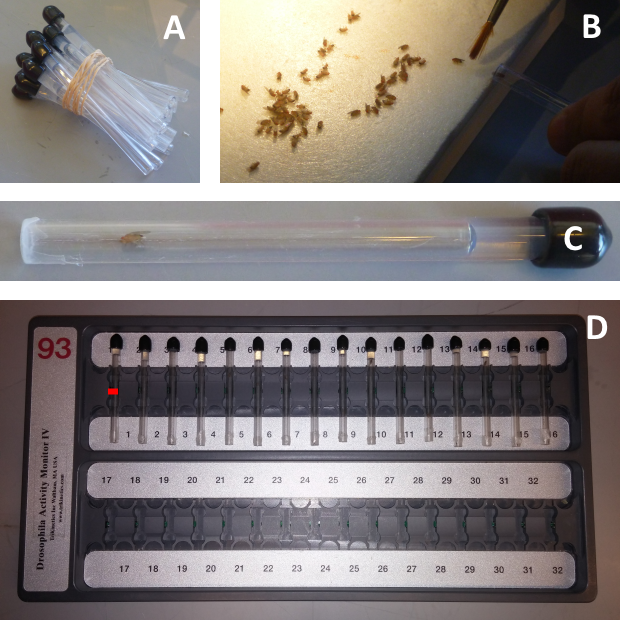 The most common method is called the Drosophila Activity Monitoring (DAM) system. Flies are loaded into individual tubes (Figures A-C) and placed in a DAM machine (Figure D). An infrared beam (marked as a red line in Figure D) crosses each fly tube, and the machine notes when the beam is blocked by the fly. If the beam isn’t broken for five or more minutes (meaning the fly hasn’t moved), it’s counted as sleep. Using this method, researchers can analyze how long a fly sleeps, how many times it goes to sleep and wakes back up (called sleep bouts) and the duration of each sleep bout. 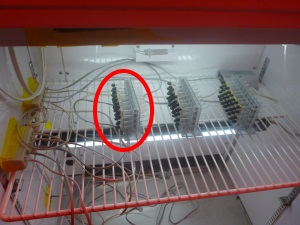 Click here for a larger version of the picture

To conduct the sleep experiment, the machines are hooked up to a computer and placed in an incubator, which controls the humidity, temperature, and lights. The light cycle is usually set to lights-on for 12 hours (day) and then lights-off for 12 hours (night), and experiments often run for several days or even weeks. In this picture, a newer version of DAM machines is shown (one is circled in red). 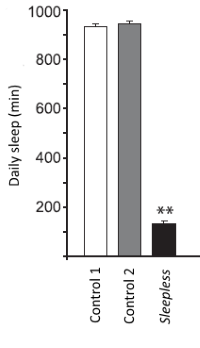 This system allows researchers to study the sleep habits of dozens of flies at once, and it’s relatively quick and easy (compared to studying sleep in mammals). So what’s an example of a real sleep experiment? In 2008, the Seghal lab used this system to find sleep-related genes. They ran a genetic screen in which they exposed a population of flies to toxic chemicals that caused random mutations in their DNA. Then, they tested the flies to see if any had sleep abnormalities. They found that flies with a mutation in one gene (which they aptly named sleepless) slept about 80% less! Isn’t it crazy that a single gene can affect such a complex behavior so dramatically?

A common way to display fly sleep habits over the day and night period for one day. The amount of sleep within 30 minute intervals (y axis) is plotted for the time of day (x axis). Note that Sleepless mutants (open circles) sleep much less than control flies (filled circles). The bar at the bottom indicates time: white = day, black = night. Image modified from Koh et al, 2008

In another experiment that same year, the Guo lab was interested in finding out how sleep affects memory. They tested the sleeping habits of a fly mutant called amnesiac, which can’t form long-term memories. They found that amnesiac mutants had very fragmented sleep (meaning that they woke up a lot during the night). The fact that the same gene is involved in both sleep and memory provides a link that researchers can use for future studies about how these behaviors are connected. 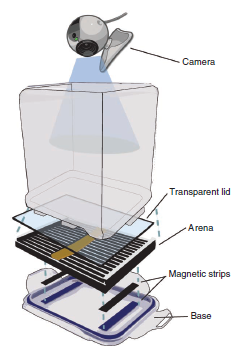 A schematic of the Tracker setup. Image modified from Gilestro, 2012

Although studies have shown that the DAM system is relatively accurate for measuring fly sleep, more sophisticated methods have recently been developed for tracking fly movement. These systems (sometimes called the “Tracker” program) rely on cameras and sensitive tracking software to measure movement at a much higher resolution. As use of the Tracker program becomes more widespread, I have no doubt that we will gain yet more insights into how and why we sleep.