Fly Life: Why fruit flies are a good model organism for research

Since this is my first post, I’d like to start by talking about the basics: Why are we doing research with fruit flies, or even animal models in general? How can these simple organisms possibly provide us with relevant data for future human research? Generally speaking, animal models are important for biological research because they allow scientists to reproduce human diseases or abnormal behavior without the ethical concerns inherent in human studies. Although there are obvious differences between humans and other animals, there are many molecular and cellular processes that are shared among all species through evolution. Many complex human behaviors are also seen in animals, such as aggression, circadian rhythms, sleep, learning and memory, and mating. By studying these processes and behaviors in animal models, researchers gain an understanding of the basic biology underlying them and can use this knowledge to figure out how diseases occur when things go awry (and then, how to fix it).

One important feature of an animal model is the ability to manipulate its genome and investigate the function of specific genes. For example, scientists know that a mutation in the Pink1 gene is responsible for early-onset Parkinson’s disease in humans1, but they don’t know what the gene does. Researchers need to know the gene’s function before they can investigate how the mutation leads to Parkinson’s disease and how to treat it. In animal models, researchers can study the gene’s function by manipulating the relevant gene in the animal’s genome. One important type of genetic modification is a gene “knock-out”, which means they induce mutations in a specific gene so that it becomes inactive or non-functional. By observing the resulting change in physiological processes or behavior, researchers can determine what role the gene played in normal functioning. In our example, scientists can knock-out the Pink1 gene in fruit flies or mice and observe on a cellular level which processes fail. As an added benefit, researchers can also observe the animals themselves to see if they display the same behavioral phenotypes as patients with Parkinson’s disease, such as tremors and slow movement.

Another type of genetic manipulation is called a “knock-in”, where researchers instead insert a gene from another animal into the genome (or, in many cases, replace the endogenous gene with another version). For example, researchers often insert a mutated version of a human gene implicated in a disease, which allows them to determine what effect that particular mutation has on the gene’s function. To return to our previous example, scientists can insert the specific human Pink1 mutation that leads to early-onset Parkinson’s disease in an animal’s genome instead of knocking it out completely. It also allows them to test the effectiveness (and side effects) of various promising therapeutic drugs before going to human trials.

So what’s this got to do with fruit flies? On the About page on this site, I gave a few of the basic reasons why Drosophila melanogaster are a good model organism for research. They have been used for research at all levels of biology, but genetic research is where these organisms really shine. Genetic manipulations are so much easier in fruit flies because they have a smaller genome which was fully sequenced in March 20002. Their short life cycle and large number of offspring are also advantageous for genetic research because new fly lines are quick and easy to make. As a result, although the manipulations I mentioned above can be performed in other animal models such as mice, mutations in flies can be generated much more easily. Making a new line of flies usually only takes about six weeks and costs less than $300, whereas a new mouse line takes months and can costs thousands of dollars.

But how do researchers initially identify the genes they’re interested in studying? In order to study a process or behavior using specific gene mutations such as those described above, the gene of interest must already be identified. Traditionally, researchers perform genetic “screens”, in which they use mutagenic chemicals or radiation to cause random mutations in animal models, and then screen offspring for abnormalities of interest and identify the mutated gene. But this process is difficult and time-consuming, and often based on luck. Enter Drosophila melanogaster! Using this animal model, researchers can conduct large-scale screens relatively quickly. For example, to find genes that contribute to sensing heat, fly researchers can test hundreds of mutant flies for impaired heat avoidance within a few months. Identifying those relevant gene(s) will then provide a starting point for studying sensory abnormalities in mammals. 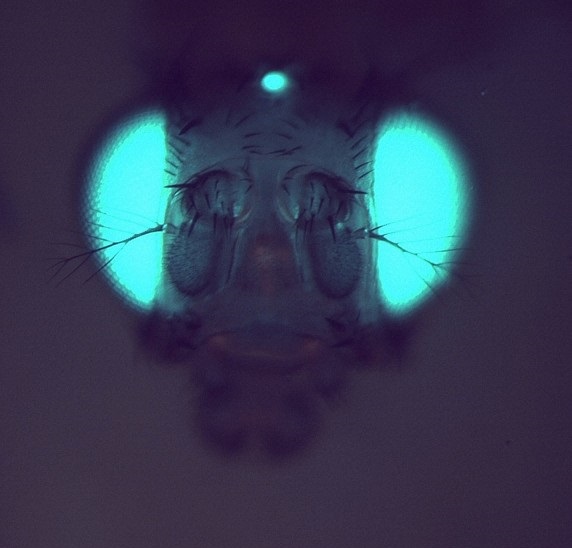 Over the years, fly researchers have also developed an impressive array of genetic tools that make Drosophila melanogaster an even better animal model for research. The list is too long to cover in this post, but there is one type of tool I want to introduce called binary expression systems. These systems allow fly researchers to insert a specific gene into a specific set of cells, and even activate or deactivate the gene at specific times. One example binary expression system is called the GAL4/UAS system. In this system, a fly line with genetic instructions for where something should be inserted (GAL4) is mated with a fly line with genetic instructions for what should be inserted (UAS). For example, the GAL4 instructions might define the cells of the eyes while the UAS might be a green fluorescent marker. The individual lines have no abnormal phenotypes, but the offspring will have green glowing eyes! (Figure 1) In practice, if a researcher wants to know in which brain structures a particular gene is expressed, such as Pink1, they can combine a GAL4 that targets “cells with an active Pink1 gene” with the green UAS. They can then view a dissected fly brain under a microscope and see where cells expressing the Pink1 gene are located in the brain. Alternatively, the UAS instructions might describe a gene to be deactivated instead of inserted, so that it is “knocked out” in a very specific set of cells. In this way, fly researchers can investigate the gene’s function in a relevant region without affecting the overall health of the fly, which is important for reproducing human diseases that target specific cell-types. And because genetic modification is so comparatively easy in the fruit fly, the fly community has created a collection of thousands of fly lines for these systems, which researchers are more than willing to share with each other. As a result, it is often very likely that a specific combination is already available for use.

Ultimately, every animal model has its advantages and disadvantages.  Researchers wouldn’t want to use monkeys for a genetic screen, and they wouldn’t use fruit flies to study complex emotions. But although fruit flies may seem very different from us, an estimated 75% of known human disease genes have a match in the fruit fly genome3-4. They are already being used as a genetic model for several human diseases, including Parkinson’s disease, Alzheimer’s disease, Fragile X syndrome, and Rett’s syndrome, in addition to the basic research needed to advance our general understanding of biology and how we work.  So the next time you see a fruit fly in your kitchen, make sure to say “thank you” before you swat it away.