The axon is the part of a neuron that carries outgoing information. (cb = cell body)

In neurodegenerative diseases such as Parkinson’s disease or amyotrophic lateral sclerosis (ALS), a genetic mutation leads to widespread neuron damage. When a neuron is damaged, its axon—the part of the neuron that carries outgoing signals—is actively broken down and cleared away by maintenance cells (called glia). This destructive process is known as Wallerian degeneration (WD) and disrupts signaling between neurons due to the loss of their axons. By studying WD in animal models, scientists hope to figure out how to interfere with it and possibly slow the progression of the neurodegenerative diseases.

Because Wallerian degeneration also occurs after physical trauma such as in a spinal cord injury, scientists usually study it by cutting or crushing bundles of axons. Traditionally, researchers have induced random genetic mutations in a population of animals (a forward genetic screen), dissected and damaged a bundle of axons in individual animals, and watched the degradation process to see if the mutation had an effect. This process allows them to determine which genes are involved in breaking down and/or clearing away the damaged axons. So far, studies in mammals and fruit flies have found three genes that are required for WD (Wld, Sarm, and highwire/Phr1). Mutating these genes slows WD significantly, and researchers may be able to target these genes in the future to slow axon death.

But progress so far has been slow due to limitations in the current methods used for studying this phenomenon. In a recent paper published in PNAS by the Freeman lab, researchers describe a new technique for studying Wallerian degeneration in fruit flies that overcomes many of these limitations. Previous work has already shown that WD occurs in fruit fly axons and uses the same known genes, so they are an ideal model for quickly identifying the genes involved in axon death.

The authors developed a system in the fly wing that fulfilled three key requirements they believed were necessary for efficiency: 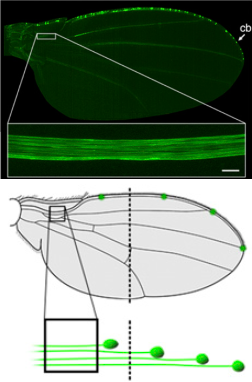 Top: A fly wing with sensory neurons labeled in green. (cb = cell body). Inset: a bundle of labeled axons makes up the L1 vein. Bottom: A schematic of the fly wing and cutting a subset of axons (dashed line). Axons with cell bodies closer to the fly’s body are spared.

The Drosophila wing is transparent and contains a large bundle of sensory neuron axons known as the L1 vein. The cell bodies of the neurons are located around the edge of the wing, and their axons extend through the L1 vein back into the body of the fly. Using genetic tools (check out this article on MARCM for details), the authors added a protein called GFP (which glows green) in a small number of these sensory neurons. This setup allows researchers to easily observe individual axons in the wing under a fluorescent microscope without dissection. These characteristics fulfill their first requirement.

This setup also easily allows researchers to sever some of the axons without injuring others by simply snipping a piece from the edge of the wing. Axons whose cell bodies were cut off succumb to WD, while axons with cell bodies were closer to the fly’s body are unharmed. This method of inducing WD in only some of the GFP-labeled neurons fulfills the second requirement.

Finally, because the entire procedure can be performed in the fly’s wing, the fly itself is generally unharmed. This fulfills the final requirement, which is important for speeding up the screening process. Usually, after random mutations are induced in a population of flies, a fly line for each mutation has to be maintained until it can be tested. But if the original fly can live through the testing process, researchers can first determine if fly’s mutation is useful and then allow the fly to mate and create a stock if it is. This characteristic not only reduces the time needed for the screen by weeks, but it also significantly reduces the amount of labor required.

So how can this help us humans? This technique can speed up the process for discovering new genes involved in Wallerian degeneration. After a gene is identified in flies, researchers will know where to look in mammals and can begin studying the gene’s function (this has already happened once, with the Sarm gene). Figuring out how these genes function will provide a target for slowing axon death, which may in turn slow the progression of neurodegenerative diseases. And it all starts with a fruit fly’s wing.