What are circadian rhythms, and why are they important to humans?

Over the past century, technological innovations have changed human society dramatically, undeniably for the better. But the advent of jet travel, round-the-clock manufacturing, and internet communication has also had a disruptive effect on our bodies’ circadian rhythms.

The word “circadian” comes from the latin words circa and diem, meaning “about a day”. Circadian rhythms—which are also referred to as our biological or internal clock—keep time at about 24 hours, and are found in most organisms including cyanobacteria, fruit flies, mice, and humans. In the wild, these biological pacemakers allow organisms to predict rhythmic changes in their environment, such as the day-night cycle of light and temperature variations. The clock helps animals to know when to sleep, eat, and when predators might be prowling.

Although the internal clock can remain rhythmic on its own, it regularly synchronizes with environmental changes such as light and temperature. This is important as light and temperature rhythms gradually fluctuate by the season, but sudden unexpected environmental cues can wreak havoc on our bodies until the clock can adapt and reset itself. The role of circadian rhythms in our lives can be best understood by seeing what happens when our clocks become desynchronized from the environment. 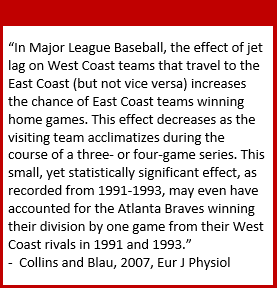 “Jet lag” is the first thing people usually think of for disruptions in circadian rhythms. When we travel through time zones, our body “remembers” the previous time zone, including the sleep-wake pattern, mental alertness and eating habits associated with it. For example, if you take a red-eye flight from California to New York, when you arrive your internal clock might tell you that it’s 3am, but outside, it’s time for breakfast. It can take days to adjust to the sudden shift in environmental cues in the new time zone, and during that time you feel tired and may find it “hard to think”.

In our ever increasing 24-hour society, disruption of normal circadian rhythms is commonplace. It can be caused by working long hours or with international partners, irregular shift-work, or even “social jet lag”, which is caused by having a different sleep schedule on the weekends than during the week. In addition, recent research suggests that teenagers experience a natural forward shift in their biological clock, causing them to become more alert later at night. During this period of life, getting up early every morning for school can be very disruptive.

When the circadian clock desynchronizes from the environment, it can have negative consequences to cognitive function and health. In the short term, a person can experience difficulties with learning and memory, mood disorders, immune system dysfunction, and generally reduced quality of life and well-being. Chronic disruption can lead to health problems such as obesity and diabetes, increased risk of cancer, heart disease, depression, and other conditions. To make matters worse, there are numerous sleep disorders that lead to loss of restful sleep. Could some of these be the result of dysfunction in the biological clock?

Circadian rhythm research is important for understanding the consequences of clock disruption and how it can be treated. There are several questions that need to be answered: How does the biological clock keep time? How does it synchronize with the environment and adjust to new time zones? Why do some individuals seem to have abnormal sleep-wake cycles, and how can these disorders be fixed?

How have fruit flies helped us understand circadian rhythms to answer these questions?

Although the existence of a circadian clock had been agreed upon for decades, until the 1970s no one knew anything about how it worked. Circadian rhythms are a complex behavior, and how do you even begin to piece together such a difficult puzzle? In 1971, a group of fruit fly researchers led by Dr. Seymour Benzer published a paper describing a gene named Period. They found three different mutations in the Period gene that caused flies to have faster, slower, or a complete absence of circadian rhythms. While it is now an accepted fact that all behaviors have a genetic component, at the time many were skeptical that genes could be involved in complex behaviors. Certainly they couldn’t believe that mutating a single gene would have an effect on something as complex as circadian rhythms.

Now more than 40 years later, research in circadian rhythms has made it the best understood complex behavior at the genetic and molecular level. Many of the pioneering experiments on circadian rhythms were performed in fruit flies because they are such an easy-to-use genetic animal model, and the genes and processes involved in mammalian circadian rhythms were often first identified in fruit flies. Once researchers understood the basic components of the clock in flies, they were able to apply that knowledge to the more complex mammalian systems in later studies. The core mechanism for the biological clock is shared between flies and mammals, which spans over 600 million years of evolutionary time!

How does the biological clock keep time? 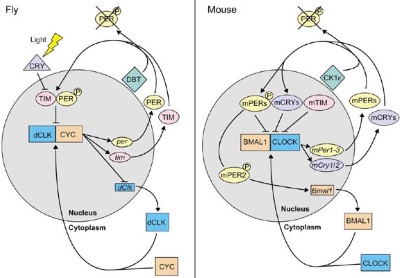 Click on the picture for a bigger version. Circadian rhythms in both flies and mice are controlled by two negative transcriptional feedback loops. Although there are various differences between the species, the structure is similar. Modified from Hardin, 2000

Since the 1970s, dozens more clock genes have been identified including Timeless, Clock, and Cycle. Researchers have learned that the clock keeps time via daily fluctuations of clock-related proteins which interact in what is called a “negative transcriptional feedback loop”. There are two such loops: the Period/Timeless (Per/Tim) loop and the Clock/Cycle (Clk/Cyc) loop. In the Clk/Cyc loop, levels of both Clock protein and Cycle protein are high during the day, and then decrease after dark. When there is enough of each protein in the cell, Clock and Cycle proteins bind together and attach to strands of DNA to activate the Period and Timeless genes. This allows the cell to create Period and Timeless proteins from the DNA’s instructions. Thus, over the course of the day, the cell starts to make plenty of Period and Timeless proteins, but light-activated mechanisms (involving a gene named Doubletime) in the cell break them down. When night falls, however, levels of these proteins can begin to accumulate. The Per/Tim loop is therefore the reverse of the Clk/Cyc loop in that there are low levels of proteins during the day which increase after dark. When the levels of each protein are high enough, Period and Timeless bind together and inhibit Clock and Cycle, effectively deactivating the Period and Timeless genes so that no new protein is being made. As the next day begins and light begins breaking down the Period and Timeless proteins again, the cycle restarts. This is a simplified explanation of the system, and there are many more genes involved (especially in the mammalian version), but this two-loop clock is found in flies, mammals, and other species, suggesting that it is the optimal system for timekeeping.

For a great visualization of how the molecular clock works, check out the graphic on this website under “How do clock genes work”. This page also gives more information about the mammalian circadian clock if you’re interested.

More recent research has also begun to focus on how networks of cells work together to keep each other synchronized. Although each cell has its own running internal clock, it can become desynchronized by error or damage. Researchers have found that clock cells communicate with each other to maintain an overall synchronized circadian rhythm.

How does the clock synchronize with the environment and adjust to new time zones?

Although circadian rhythms continue even in the absence of environmental stimuli (such as in complete darkness and stable temperature), the clock can also synchronize with the environment based on cues such as light, temperature, or other rhythmic stimuli. The actual circadian period is slightly longer than 24 hours, but the environmental length of day can vary based on location and/or season. Researchers have found that the clock can be reset by unexpected light pulses or fluctuations in temperature, but how do external cues reset the clock? While not much is known yet about the effects of most cues, scientists have made extensive progress in understanding how the clock synchronizes to light. 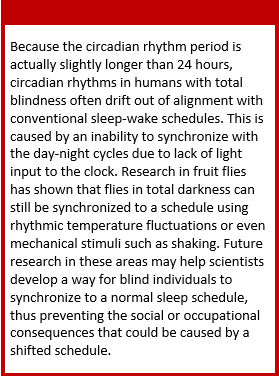 In fruit flies, light entering the brain through the fly head and eyes can break down the Timeless protein, so levels of this protein can’t start to increase until after dark. This contributes to the normal cycling behavior. But when an unexpected light pulse occurs, such as too early in the morning or too late at night, degradation of Timeless causes the brain to think that the next “day” cycle has begun and resets the circadian clock. There are other genes involved in this process as well, such as Crytochrome and the aptly-named Jetlag. In 2006, it was found that a mutation in the Jetlag gene causes defects in flies’ ability to adapt to a new light-dark cycle.  A shared gene in humans might be responsible for differences in individuals’ ability to adapt after flying to a new time zone.

The future of circadian research: Why do some individuals have abnormal sleep-wake cycles, and how can circadian disorders be fixed?

By increasing our understanding of how the circadian clock ticks away the time and responds to environmental cues, we may be able to design drugs to treat jet lag, reset circadian rhythms, or even reverse the consequences of a desynchronized clock.

Research may even help scientists better understand human sleep disorders such as narcolepsy or insomnia and identify underlying circadian components. For example, humans with a sleep disorder called Familial advanced sleep phase syndrome (FASPS) have been described as having a shifted circadian rhythm. Though they have a normal sleep structure, everything is pushed forward by about 4-6 hours. As a result, individuals tend to wake up well before sunrise (around 1-3am) and feel compelled to sleep around 6-8pm. A similar shifted sleep schedule has been reported in Doubletime fruit fly mutants and tau mutants in hamsters. Eventually, researchers found that FASPS is caused by mutations in similar clock genes in humans called PER2 and CSNK1D. A better understanding of the role these genes play in circadian rhythms could help scientists develop medicines to treat this disorder.

Interested in recent circadian rhythm research in fruit flies? Check out the Breaking Research post on WIDE AWAKE, a gene that explains why we feel sleepy at night.