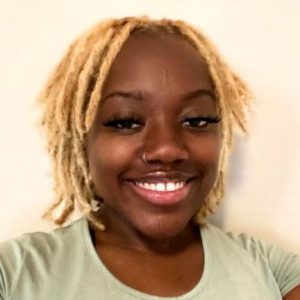 As we near the end of Black History Month, I wanted to take the time to reflect on what the month means to me as a Black first-generation graduate student.

Higher education was not accessible to Black Americans for years. I remember learning about the history of my ancestors who fought to learn how to read, write, and to attend classes with their other peers. They were belittled, hosed down, and even killed when trying to further their knowledge. Without their sacrifices and fearless hearts, I would not be able to attend this university today.

I reflect on the way my ancestors used the power of non-violent protest and their voices in order to advocate for the space and the opportunity to advance their educational skills in the real world, and so that their children, grand-children, and great-grand-children could do the same. Education Rights Activist, Malala Yousafzai, said, “Let us remember, one book, one pen, one child, and one teacher can change the world.” I imagine what a world would be like without the input, creativity, and ideas offered by Black Americans. I believe that we would struggle intensively when climbing the ladder of economic and social advancement in this nation without it. What saddens me the most is that after years of blood, sweat, and tears, Black Americans still have to fight for a seat at a table.

My hope is that through my time at Heller, I will be able to not only enhance my skills and expertise but also utilize my experiences to connect to my peers and faculty. I want to be able to embody the strength my ancestors had when advocating for issues that I believe in. Even though this month is the shortest one of the year, celebrating the accomplishments and strides of Black Americans in this nation from the past to the current this does not mean our accomplishments are short-lived or do not exceed expectations. The world moves because we move and I will continue to make sure of this whenever I enter a room no matter what month it is. Black History Month makes me feel a wave of emotions that can be excruciating at times, but it is also extremely beautiful and eventful. This month makes me feel alive and proud; I hope that I can continue to celebrate and shine a light on my community for years to come.

Katherine Kennedy, also known as KK or Ms.Kennedy, is a Boston native and for the last 18 years served as Director for the Howard Thurman Center of Common Ground at Boston University. I met Ms.Kennedy in 2017 when I was in search of a community on the Boston University campus. I remember entering the HTC one random day and I introduced myself by my nickname, and she said to me “Young lady, now what is your actual name, because I know that is not the one your mother gave you.” From that day forward, Ms.Kennedy became one of my favorite faculty members at Boston University. Before her time at BU, she started her career as a journalist for the Boston Globe where she served on the team that received the 1975 Pulitzer prize for Meritorious  Public Service for reporting on the Boston busing crisis of 1974. She was then recruited to the University of California Berkeley, where she established the minority journalism program. After her time with Cal Berkeley, she worked for the NFL and the New England Patriots where she piloted a degree program for active players. Ms. Kennedy showed me the meaning of being an active community member.

Stacy Abrams is a Black American politician, lawyer, and author who served on the Georgia House of Representatives from 2007 to 2017. She is mostly known for her work in advocating for the best voting rights practices. She is the founder of Fair Fight Action, whose primary goal is to promote fair elections across the country, encourage voter participation in elections, and educate voters about elections and their voting rights.  Abrams is one of the reasons I became interested in voting rights and how voting is not as accessible as we think it is. Abrams helped me understand the true meaning of my vote and why voting amongst the people of the global majority is important so that we are able to amplify our voices and make sure our needs are met. Thank you, Stacey Abrams, please keep fighting!

Ms. Unbought and Unbossed herself! Shirley Chisholm was the first Black woman elected into Congress in 1968, where she represented New York’s 12th Congressional District for seven terms. Before joining Congress, Chisholm worked for the New York’s State Assembley. Chisholm gave us the best piece of advice yet, “If they don’t give you a seat at the table, bring a folding chair.” Chisholm was a trailblazer, she was a force to be reckoned with, and she would never back down from a fight, especially when it regarded basic human rights, healthcare, minimum wage, and education. She taught me to never give up, to always fight for what I believed in, and that my knowledge is a tool that could always be utilized for the greater good. Without Chisholm, women like Stacey Abrams, Kamala Harris, and many more would not be in the positions of power they are in today. Thank you, Shirley Chisholm for leading the pack; we are truly grateful for the doors you have opened for Black women in politics.