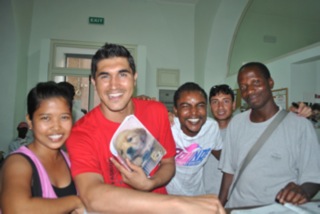 With all of this information in mind, and curious to learn more, I decided to volunteer at a center for immigrants and refugees in Catania, during my free time. At the center I taught Italian to the newest arrivals. At first, in February, most of my students were from western Africa, countries like Mali and Senegal.  But then the war started in Libya.  Due to my close proximity to an American military base I would often hear and see helicopters headed toward Libya that was relatively nearby. The second experience I had of the war was one rainy day when I had two new students. The two new students were 17 year old girls of Eritrean descent. They spoke a bit of English and were relieved to have finally found someone else at Centro Astalli that could speak a common language. They also felt comfortable around me because of my age and my familiar East African appearance. END_OF_DOCUMENT_TOKEN_TO_BE_REPLACED