With all of this information in mind, and curious to learn more, I decided to volunteer at a center for immigrants and refugees in Catania, during my free time. At the center I taught Italian to the newest arrivals. At first, in February, most of my students were from western Africa, countries like Mali and Senegal.  But then the war started in Libya.  Due to my close proximity to an American military base I would often hear and see helicopters headed toward Libya that was relatively nearby. The second experience I had of the war was one rainy day when I had two new students. The two new students were 17 year old girls of Eritrean descent. They spoke a bit of English and were relieved to have finally found someone else at Centro Astalli that could speak a common language. They also felt comfortable around me because of my age and my familiar East African appearance.

After our first class together, the girls told me how they had been in Libya just three days ago. They had moved there three years ago to find work and “religious freedom.”  When the war started, they said, they were released from some sort of political prison in Libya. Initially, I was intrigued by their story and thought, “Wow, these poor girls! How heroic they must be!”

I thought about them more. I then consulted Professor Klausen who pointed out the holes in their story. There was no way they could have seriously gone to Libya to seek religious freedom. Libya has never been known as a liberal country. Also, it was highly improbable that the Libyan government would have placed these girls in prison. I spoke to the lawyer at Centro. He told me that they almost certainly paid to go to Sicily in a boat, illegally, like most of the other new refugees. I’m still not entirely sure why they lied. I suppose that they were afraid that they wouldn’t receive political asylum, as easily, had their stories not been so extreme. 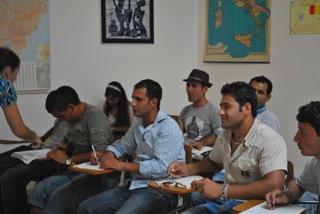 Although most of the refugees were Libyan residents, they were of other ethnicities (mostly black Sub-Saharan African). From my interviews, I gathered that many black Africans were happy living in Libya before the war started. They had jobs, homes and security – things they will have trouble finding on their road ahead in Sicily. However, Libya became unsafe for them. Libyan rebels think that all black African residents in Libya are Gaddafi’s mercenaries and have started harassing them. A lot of blacks have tried fleeing Libya to go back south into Sub-Saharan Africa. Rebels, however, block the highways. For many, illegally paying to go to Sicily is their only option.

After two more days the girls never came back, and I never saw them again. I stayed in Sicily during the summer and met and formally interviewed many other refugees and immigrants. I studied many of the immigration laws and worked with the lawyer while conducting these interviews, enough to realize when more refugees would lie to me.

The Italian government forbids anyone from entering the refugee camps. I know of about 5 of them in Sicily, and I am sure there are more. I could not enter even one of them.  The refugees were allowed to leave and were often found hanging out in front of the camps because that is really all they can do. They cannot go back to Libya. Italian lawyers are, therefore, helping some of the refugees with obtaining legal documents and permits.

But even these lucky few that escaped have tough times ahead. Most of the immigrants I interviewed did not have jobs, and Sicily has always been more impoverished and less developed than the Italian mainland. This year I will write a thesis on refugees in Sicily, and will try to describe the complexity, and the apparent hopelessness, of this situation newly spawned by the war in Libya and the lives it has affected.

One Reply to “Another Side to the War in Libya”