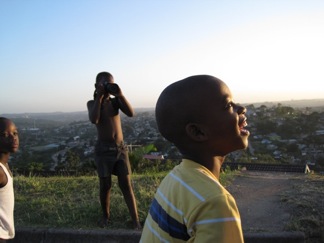 There was an odd quiet and calmness to the house. When all of my siblings and mother were home, the television was kept on, house music blasted out of the stereo and my brother, Simphiwe was always laughing and text messaging his friends. Sanele was usually outside singing and dancing with her friends or neighbors. Now, however, everyone was seated in the couches and lounge chairs in the living room area. My mama started preparing the house for the thunderstorm. She covered the mirror with a blanket, turned off the radio and television and covered the windows with the shades. As the rain started to pour, the house became increasingly quieter. Whenever I attempted to peer outside of the windows by pulling back a curtain, my mama shot me a subtle glance of disapproval. My mother sat on couch and covered her head with her hands and slowly rocked back and forth. My brothers also became eerily silent and looked at the floor. Kuhlekan, my 20-year old brother, had a newspaper over his face. END_OF_DOCUMENT_TOKEN_TO_BE_REPLACED