Berliners are also ardent fans of Hertha, their very mediocre football team wishing it was a European juggernaut. I was told that no trip to Berlin is complete without visiting the Olympic Stadium and seeing Hertha battle it out against a league rival (this was same stadium that Jesse Owens ran his historic race!). While our obstructed last row seats were less than ideal, we were surrounded by drunken Berliners singing and chanting about Hertha BSC, and we soon joined in. Despite a tiny 5 year old child flipping off the other team when they scored, Heartha sadly lost 2 to 1.

One major asset that Berlin has going for it is its abundance of delicious cheap food. KadeWe, a department store, formerly serving as a symbol of Western wealth to East Berliners, is a gastronomical Mecca with a full floor dedicated to German würstes, fish, and cheeses. Additionally, there are men on the street everywhere selling bratwurst and currywurst cooked on grills strapped to their body. Curiously, bubble tea is the newest craze to hit Berlin. Pretty much on every street there is a store exclusively dedicated to this Asian tapioca drink. The real star of the Berlin street food scene is the döner kebab, a Turkish sandwich filled with either lamb or chicken and covered in garlic sauce. There is no better late night food to eat then this culinary delight. In fact in my three days in Berlin, I ate five of these sandwiches! 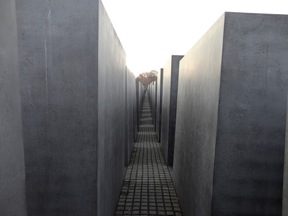 Some of my more somber experiences of Berlin were trips to monuments remembering the atrocities of the Holocaust. Unlike in other places where memorials are meant to harp on the sadness and facts of the Holocaust, the memorials in Berlin are meant to invoke personal feelings. The Jewish Museum, unlike any other I have ever visited, is interspersed with exhibits serving as architectural spaces that evoke emotions about the Holocaust. One such space is the Holocaust tower, which is a dark unheated room that only has a tiny slit where light enters through the top. To me, the tower induced feelings of the despair and bleakness of the Holocaust coupled with the hope of survival. Located in the center of Berlin, the Holocaust memorial was another extremely powerful site. The memorial is composed of giant cement slabs that have minute differences. They are all slightly different heights and are placed in varying angles. While walking through this memorial, one feels the vastness of the Holocaust and also the overwhelming sensation of being lost and confused.

All in all, my trip to Berlin was truly fantastic. I loved the German food and people. I loved seeing all the sights and walking around this great city. I cannot wait to go back again.