Editor’s note: Dr. Beatrice de Gasquet will moderate our discussion of “The Challenges of Global Migration” (this Wednesday, Feb. 15th, at 6:30 pm in the Mandel Center Reading Room).

Next fall Dr. de Gasquet will teach A Democratic Babel? Language Politics in Contemporary Europe.  The class that will use language to explore topics in European politics such as European integration, the persistence of nationalisms, regionalism, minority rights and immigration. 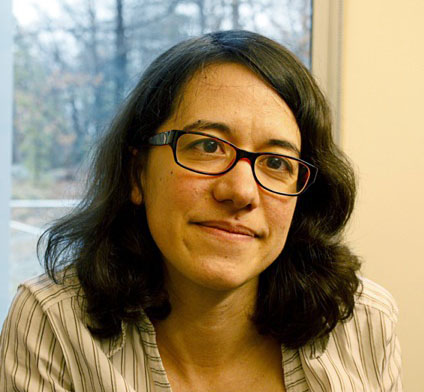 What IGS classes have you taught at Brandeis?

In the Fall I was teaching a class called ‘Behind the Veil’ about religion and ethnicity in France. The idea was to start with the law banning the veil in schools (and later banning the full veil in public space) and then talk more broadly about issues of religion, politics, race and immigration in France.  So we looked not only at Islam but also Catholicism, Protestantism, Judaism in France to understand the history of religion, politics and secularism and how it intersects with the history of immigration in France. The point was to begin with a very specific issue and draw out the links with larger historical and political issues.

How do you think that these themes are relevant and useful for IGS students?

There were several things that came up especially in class discussions that are relevant for IGS students. For instance, depending on the country, the way people view the relationship between religion and politics is very different. Of course, the French view and the US view contrast quite nicely and this comparative aspect was very interesting to many students. I saw this in the presentations they did. Some talked about religion and politics in Morocco and Turkey so we had nice comparisons with other countries looking at race and immigration in different ways. There was another aspect that came up regarding the relationship between French and US politics.  French politics, on many issues, is in part a reaction to a perceived threat to national identity or independence from either the US or Europe or immigration from North Africa. So we addressed this particular connection between religion and concerns about national identity in France as opposed to other countries such as the US.

What is your current research about?

My research until last year was about gender and French Judaism looking at women participating in ritual and synagogues and how this connects to larger issues in France of the opposition between religions thought of as conservative versus progressive and how this intersects with French gender politics. Now I am trying to introduce a broader perspective comparing different religious and ethnic groups in France on the aspect of gender.

How does your research speak to contemporary global issues?

I am only just starting out on this but like I have already mentioned a comparative dimension is very important. With regards to ethnicity for example, it depends on the country you are looking at, but at the same time within the same country you can in fact have more diversity than if you look from far away. Very often, I find that students (American or otherwise), who are looking at a foreign country, tend to typify and oversimplify it and look only at the differences between that country and the one they know, rather than acknowledging that within these foreign countries there is indeed a great deal of diversity. For instance in France, not everyone is secular or not everyone is Catholic or not everyone is against the veil in public schools. Gender is a good way of addressing this diversity because depending on the groups their ideas of politics are also very different. Understanding diversity both across and within nations is, therefore, very important when thinking about global issues today.

Beatrice De Gasquet is Florence Levy Kay Fellow in Culture and Politics in the Francophone World.