By Ivan Ponieman-Ferradas in Madrid, Spain

I am a rising junior majoring in Economics and International & Global Studies.  This summer I am interning for the United States Department of State Foreign Service at the U.S. Embassy in Madrid, Spain.  The Foreign Service carries out American foreign policy around the world.  Its mission is to promote peace, development, and democracy abroad for the benefit of the American people and people everywhere.

I have wanted to intern for the Foreign Service since I was a senior in high school, when I learned about the internship opportunity through the Department of State website.  When the application period opened last November, I worked closely with career counselors at Hiatt to make sure that my application reflected strong candidacy. 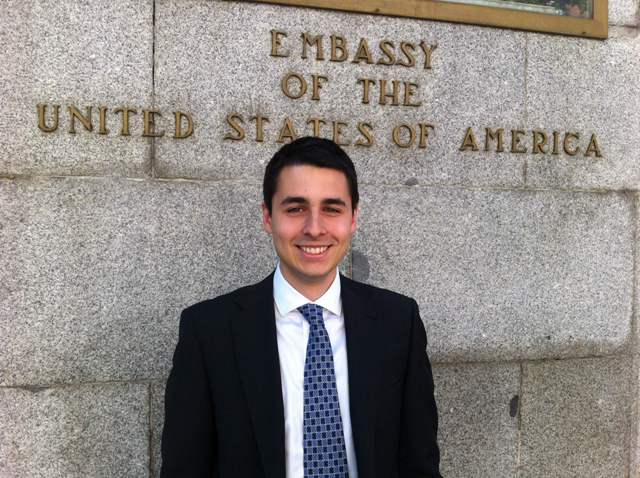 I applied to the internship online and was offered a position in December upon receiving security clearance.  After completing extensive paperwork and being interviewed by federal investigators, I successfully received my security clearance and a final offer during early March.

The Embassy in Madrid is divided into five different sections: management, economic, political, public affairs, and consular.  I am working at the consular and economic sections.

The consular section is divided in the Visas unit and the American Citizen Services unit (ACS). Visas is in charge of processing both immigrant and non-immigrant visas for foreign nationals who wish to travel to the United States.  ACS takes care of American citizens in Spain, from processing new passports to going on prison visits and handling abduction cases.  I am currently working in Visas assisting consuls in processing an average of 200 daily visa requests.  I work with the general public receiving cases, entering passport data, and taking fingerprints.

The economic section works mainly with the Spanish government to handle the current economic crisis, but also works on issues of energy, sustainability, economic development, and elaborates reports on the economy that are later sent to Washington.  I also worked on the Embassy’s annual 4th of July party.  This is the largest and most important event of the Embassy, with around 3,000 attendees ranging from World War II veterans to Spanish government officials and foreign diplomats.  I worked with an Economic Officer soliciting financial support from both American and Spanish businesses.  I organized and updated all information using a spreadsheet and personally spoke with business executives on behalf of the Embassy about the event and financial support.  I also contribute to the daily economic press report that is sent back to the U.S. by reading articles from local newspapers and summarizing them.

So far, my experience at the Embassy has been absolutely wonderful.  During the first week, I met with officers from all around the Embassy.  These meetings, which ranged from health unit personnel to diplomatic security special agents, were a great opportunity to ask a lot of questions and to understand the bigger picture of how the Embassy carries out its mission.  All officers are very nice and approachable, and they really make an effort to integrate interns and answer all of our questions.  I had the chance to meet with the chiefs of the Visa and ACS units, the Deputy Chief of Mission, the Consul General, and many other very experienced officers who were highly interesting to talk to.  It was also especially interesting talking to the General Services officer, who explained how housing for U.S. diplomats is arranged.

With regards to work, I was fully integrated into the staff and was working in a fairly independent manner. I feel I have already gained a lot of valuable and insider knowledge about the Foreign Service and American diplomacy in general.  I have also improved my multitasking, data analysis, communication, and customer service skills.  Hopefully, I will have a deep understanding of the mission and dynamics of the U.S. Foreign Service and a clear view of what a career as a Foreign Service Officer is like by the end of the internship.  I will network across every Section of the Embassy to better understand its functioning and its overall mission in Spain, and will continue to develop my work skills.

Feel free to ask any questions about the Embassy, the Foreign Service, Spain, or anything else!  You can reach me at iponiema@brandeis.edu.