Who wants to launch a reality TV series focused on rural development?  Or a digital music company featuring folks songs of Latin America?  Or maybe a global student news service app on your I-Phone?

With help from a distinguished alum in Mumbai, this week “Introduction to International and Global Studies” got into the Global Media business.

Students in IGS 10a have spent the past month thinking about globalization and culture.  Are there fundamental barriers between cultures that even the global media can’t completely bridge?  Does the arrival of a new art form, such as film, transform the content of culture?

Then it was time to design media projects of their own.

First each of the class’s 75 students submitted a proposal for a new media venture.  Ideas included a reality show where children from China and the U.S. swapped households for a month, and a website offering opportunities to practice conversing in languages with native speakers worldwide.

Next, student broke up into nine working groups, gathered at ballroom tables in the International Lounge, to decide which of their proposals to back.  The groups wrote up final proposals on the spot.

Then came time for expert outside advice.  The nine proposals were e-mailed to Mumbai, the capital of India’s exploding media business.  That’s where Siddharth Joshi, IGS UDR of 2011, has worked with CA Media (Chernin Asia Media) since near its inception.  Peter Chernin and Paul Aiello co-founded CA Media to build, manage, and operate media, entertainment, and technology businesses throughout Asia.  Peter Chernin, the founder of The Chernin Group and Chernin Entertainment, previously served as President and Chief Operating Officer of News Corporation, and as Chairman and Chief Executive Officer of the Fox Group.

At CA Media’s India office, Joshi has watched his firm play a major role in the globalization of Indian culture.  Recent deals have included working with Spiderman creator Stan Lee on a new Indian superhero and a new graphic novel called 18 Days based on the Hindu classic The Mahabharata (www.graphicindia.com). Another has seen the setting up of a live events business which has brought artists like David Guetta and Norah Jones to India.  Having seen and analyzed hundreds of proposed ventures, Joshi was the perfect person to review the student’s work.

Joshi took IGS 10a just five years ago, but came back to the class, via Skype, to tell students what he’s learned since.  “If I were writing my papers for IGS now,” he said, “I would have hundreds of examples to use.”

First, he spoke to students about the opportunities and challenges of the Indian cultural market.  Success in global business means knowing local markets and cultures.  Unlike the U.S., for example, the exploding digital platform in India is the cell phone. Content like video, songs, and graphic novels should have a phone-friendly element to ensure wide spread proliferation and success.

He then advised on the students’ proposals.  “Raices,” (“Roots”) the reality show promoting rural development, could do a lot of good, Joshi suggested, but it ought to be targeted not at the rural regions themselves, but rather at the wealthier urban professionals who might like to help the countryside.  The Global Student News app would need careful editing to ensure that its content was reliable.  Producing and selling authentic folk music from villages in Ecuador and Peru was only the beginning, Joshi said; the content could also be sold to a global channel such as Pandora, or even tied to the marketing of traditional instruments. Producers would just have to make sure the artists were fairly paid.

Joshi signed off to a round of applause and thanks from students, and with hopes that he could come back to Brandeis in person someday soon. 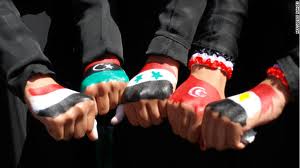 What are the consequences of the Arab Spring? Will the Middle East be more radical now? How will recent events affect the ever-changing demographics of the region? How does Egypt, Israel, and Iran view these uprisings? Come listen to experts address these questions and others.

Food will be served!