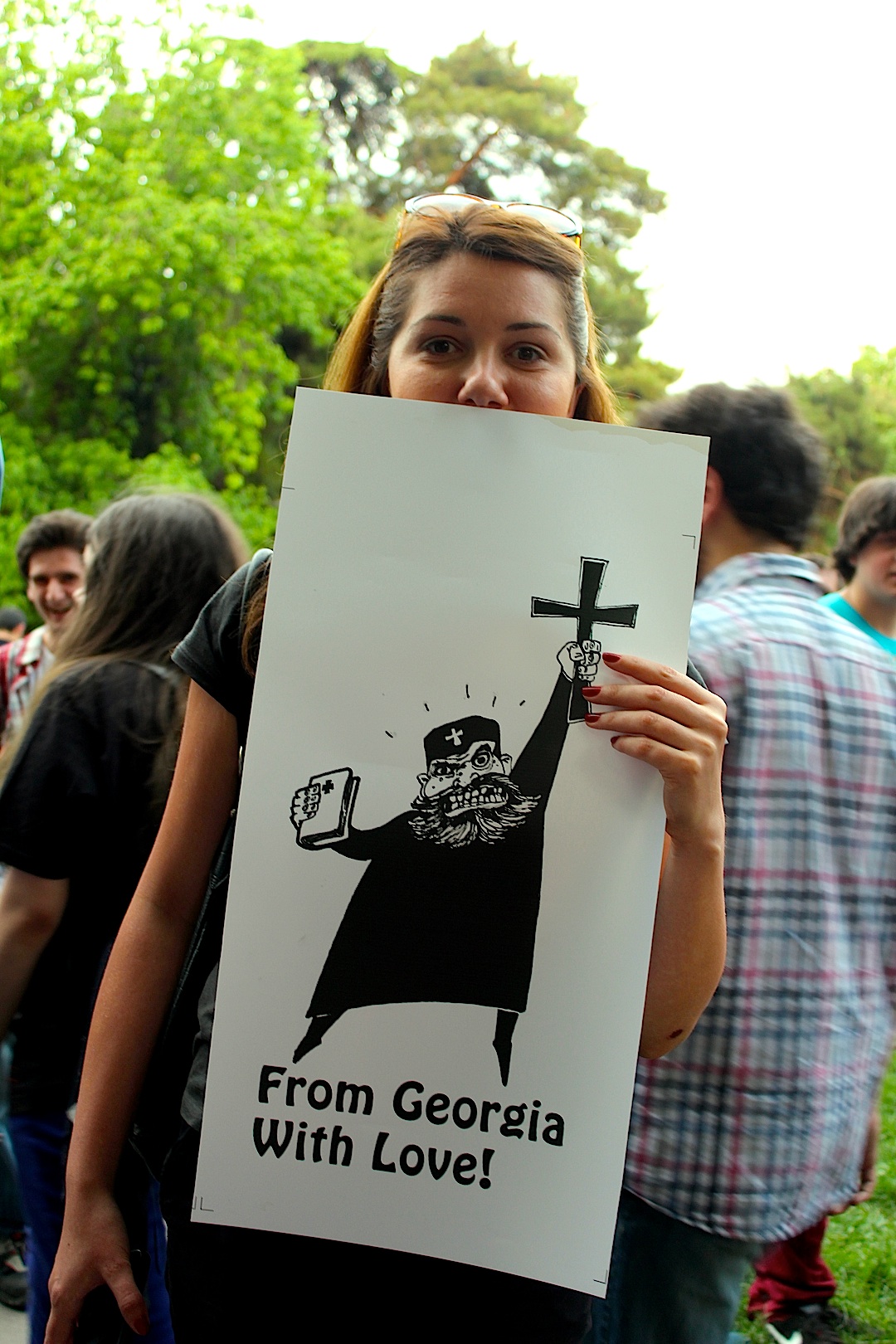 Having struggled against the oppression of first the Russian Empire and then the Soviet Union, Georgians have become to believe that the Georgian Orthodox Church is the only institution capable of preserving and protecting the Georgian Nation. The church was successful in maintaining its status and influence throughout decades of occupation, but since its liberation from the Soviet Union in 1989, the church has become not only free, but also excessively active, enjoying the support and unquestionable trust of at least 90% of the Georgian population. The majority of devoted Georgian Christians, including priests, have not withheld themselves from making homophobic statements, as well as actions. On 17th May 2013, Tbilisi, the capital of Georgia, saw extremely violent actions against LGBTQ supporters on the streets of the city.

On the international day against homophobia, Identoba, a Georgian LGBTQ rights supporting organization, in collaboration with other organizations, as well as independent supporters, planned an event on the central Rustaveli Avenue. The original plan was to have all the supporters stand in front of the former parliament building from 1 PM – 1:30 PM in a silent demonstration, showing the importance of protecting the human rights of the LGBTQ community. On the evening prior to the event, the current Patriarch of Georgia, Ilia the Second, made a statement, condemning the planned event, claiming that homosexuality is a sin and its spread should be avoided. In response to his statement, more than 10,000 people gathered in front of the former Parliament building at midnight and spent all night there, following the orders of the priests that led this anti-LGBTQ demonstration. On the morning of 17th May, approximately 2,000 policemen received the order to surround the anti-LGBTQ demonstration in order to avoid a possible clash, as the LGBTQ-support demonstration was continuing as planned.

As I reached Rustaveli Avenue through the underground system (the only way of getting there, as anti-LGBTQ demonstrators had blocked all the other surrounding streets), the police escorted me to Liberty Square, which lies at the very beginning of the Rustaveli Avenue, not far from the former Parliament building. As the anti-LGBTQ demonstrators had taken over the grounds surrounding the former Parliament building, the location of the LGBTQ-support demonstration was promptly changed to Pushkin Square, right next to Liberty Square.

At around 12:50 PM, as I was standing in the middle of Pushkin Square in a group of 7 people, (5 of whom were not Georgian), all the legal observers as well as local journalists started running towards the police cordon on Rustaveli Avenue, blocking the way for anti-LGBTQ demonstrators, so that they could not approach Pushkin square. I was surprised and slightly scared by the fact that only about 50 of us LGBTQ supporters were left at the square. I soon saw an aggravated crowd of 10,000 Georgians, eager to “protect Christianity,” running in our direction. Priests swearing; several of them carrying stools that they later used to hit mini-buses that were carrying LGBTQ-supporters out of the spot; men in traditional Georgian dress screaming, running towards Pushkin Square chanting the Lord’s prayers, occasionally interrupted to curse at the LGBTQ-supporters; older women running with nettle plants in their hands that they wanted to beat us with; all 10,000 people, in religious ecstasy, with one aim – to protect Christianity from perversion by murdering LGBTQ-supporters.

The police escorted LGBTQ-supporters to 5 mini-buses in order for them to escape the scene. Several of these buses, however, got stuck in the crowd of the anti-LGBTQ crowd that kept screaming, “Do not let them go,” and were severely damaged, hit by stools, garbage-bins etc. The group that I was in was not able to get on one of the buses and was surrounded by the entranced crowd, but we were let into a nearby shop. We had to hide for approximately an hour before Ministry of Internal Affairs agents escorted us to their car and took us to a different part of the city.

The reaction to the event was mixed, with part of society even approving the actions of the violent side, for the sake of “protecting” the Georgian religion. Politicians’ statements were also twisted by some of the conservative TV stations to make them seem biased to the anti-LGBTQ side. In reality, however, the Minister of Justice, Tea Tsulukiani, as well as the Prime Minister of Georgia, Bidzina Ivanishvili, condemned the actions of anti-LGBTQ supporters, stating that they did have the right to freedom of expression, but were legally responsible for their violent actions. Yet, only 4 people were arrested. The Patriarch of Georgia also made a statement on the evening of the 17th condemning the actions of the priests and denying his own participation, or that of the Georgian Church, in planning the anti-LGBTQ demonstration. After 9 weeks, however, one could see small changes in some of society’s attitudes toward LGBTQ people. These people, even if not supporting LGBTQ rights, did condemn violent behavior against them. Social studies show, however, that the Georgian society, as a whole, has not lost any trust in the institution of the Georgian Church.

Unfortunately, most of the outspoken Georgian LGBTQ rights activists, as well as openly queer Georgians were too alarmed to attend the event on17th May, not even mentioning hundreds of individuals still in the closet. On 18th May, however, LGBTQ supporters, now more than 500, showed up in front of the Government building to protest the violence of anti-LGBTQ groups. The police ensured that the demonstration was conducted peacefully, even though there was yet another anti-LGBTQ demonstration held. Undoubtedly, The anti-LGBTQ demonstrators still wanted Georgia to join NATO and the EU. They did not restrain themselves, however, from crying out their opposition to the role of the West in perverting Georgian culture.

A week after the event, another demonstration was organized with the theme: “Anti-Theocracy.” More than 1500 people showed up and approximately the same number attended its anti-demonstration, held right next to it in Dedaena Park, a location known for Georgians’ struggle to protect the Georgian language from Soviet oppression in the 20th century. I did not necessarily agree with the theme of Anti-Theocracy because I do not believe that Georgia has ever faced a threat of a theocratic rule. Over the past few centuries, especially when Georgia was still a monarchy, whenever the church showed interest in interfering with the body of the state, the monarchs made sure to preserve the secular character of Georgian governance. On several occasions, they even issued capital punishment to religious leaders for treason. The current Georgian church and the Georgian Patriarch have shown no interest in initiating a theocratic rule; it is only those who misinterpret Georgian religion and twist it to their own benefit. Even though I did not agree with the formulated theme of the demonstration, I believe that the essence of the protest was the protection of the human rights of every Georgian citizen.

Only 2-3 weeks after the 17th of May, I served as the Vice President at the biggest session of the European Youth Parliament in Georgia. I chaired a committee of my own, the topic of which I had chosen to be LGBTQ marriage and adoption. As we presented the resolution supporting same-sex marriage and adoption in front of the General Assembly, where 100 other Georgians debated it, I was surprised to see that most of the delegates did support the protection of the human rights of LGBTQ people. They did, however, oppose child adoption. It would be more accurate to say that most of the delegates supported LGBTQ people, as long as they were not in Georgia. The younger Georgian population, especially those who study or plan to study in the West (mostly US, UK, Germany, France), demonstrate a willingness to accept sexual minorities; yet, hardly anyone dares to be openly LGBTQ in Georgia, thereby hiding in the closet of straight sexual orientation.