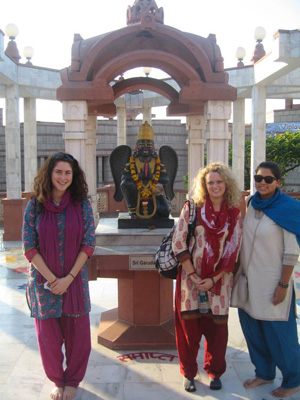 Hi everyone!!! As you are all important members of my life, and communication in India can be a challenge, I thought that I would try and share my travels with you through a weekly update. When I started writing this post, it turned out to be quite long, so I am going to divide it into a few sections. The first one will discuss Indian culture, and my reactions. The following updates will discuss more about my program, what I am have been learning, and my adventures in Delhi. Stay tuned!

It was quite a long journey for me to arrive in India. Danny drove me for 4.5 hours to the Newark Airport from Boston, and then it was another 14 hours to Mumbai, a three hours layover, and then a 2 hour flight to Delhi. The plane left from New Jersey at 4:30 pm on January 30th and I arrived at 11:00 pm on the 31st in Delhi. I am not the biggest fan of flying, so to say the least, it was not the most pleasant experience.

When I first arrived, I was overwhelmed by the smell and the smog. Delhi is one of the most polluted cities in the world. The best description of the smell that I can give you is that of urine. The smog varies depending where you are in the city. I don’t really notice it anymore, but it was impossible to miss when I first got here.

For the first few days, we stayed in a hotel and had orientation. There are 27 kids on my program, 2 of which are boys. All of the students are from the United States, with the exception of Tobias, who is from Germany. Orientation last for four days, and consisted of lectures that discussed safety, how to stay healthy, how to concur culture shock, culturally appropriate behavior (such as what to wear and proper eating manners), home-stay tips, and activities that familiarized us with Delhi, such as taking the metro. After the four days, which we moved out of the hotel and in with our host families.

My host-family has been challenging. The first few days were very difficult, but it is getting easier with time. No family is perfect, and I am trying my best to work with the family as well as my program to help with the transition. Some of the problems stem from cultural differences, and some from issues within family. Let’s just say that I am so grateful to have grown up with some of the most incredible, nurturing parents in the world. I love you Mommy and Daddy!

This week was our first week of classes. Our schedule consists of an hour long lecture on Hindi grammar, followed by a 15 minute chai break. We then have an hour’s worth of Hindi drills, followed by a half hour break. This is followed by an hour and half lecture on a health based topic. This lecture tends to be more than an hour and a half because the Indian concept of time is very different from ours. At 1, we have lunch, followed by optional Hindi office hours from 2 until 4. Our initial lessons are very heavily focused on Hindi because we will be expected to conduct interviews in Hindi during our independent study just two months from now. It is also important because outside of Delhi, fewer people speak English. Often times, instead of Hindi office hours, we will have a day long excursion. A few days ago we visited a slum in south Delhi. I will talk in detail about that visit in a later post.

Interesting things about India!
The bathrooms: Indians do not use toilet paper. Instead, they use a small nozzle that shoots water or a bucket of water. To wipe, they use their left hand. It is socially unacceptable to use your left hand during meals because it is considered dirty (for good reason). I’m a lefty, and I try my best to remember, but often times I still wind up using my left hand. It is something that I hope will come with time. Also, I use toilet paper. I can’t really get use to the whole hand wiping thing. My home-stay and program center both have western toilets, adding to my level of comfort. I will be experiencing non-western toilets for the first time next week during my excursion to Aligarh. These toilets are basically holes in the ground. I’ll let you know how that goes. Keep your fingers crossed.

The showers: I use a bucket. We are lucky enough to have a water heater. Even then, the water is often lukewarm at best. I have successfully learned to wash my hair with a bucket. With the amount of hair I have, I consider this to be quite an accomplishment!

The traffic: Driving here is impossible to compare to anything in the states. The roads are shared by cars, trucks, lots of motorcycles that weave in and out, cows, dogs, pigs, people, bicycles, and rickshaws. Basically, there are no rules when it comes to driving. Speed limits do not exist. Everyone honks their horn constantly. And the horn sounds are all different. Its sounds like an opera of blaring horns all day long (the horns stop at night because no one travels after a reasonable hour). The smell of exhaust is a constant. When I am not walking, I take either a bicycle or auto rickshaw to get to and from the metro to my destination. After flagging one down, you negotiate a price. There is something called skin tax here. I am charged almost triple the amount that an Indian would pay. After I have negotiated a price and they agree to take me, the ride itself is quite an adventure. On one of my rickshaw rides, the driver went on the opposite side of the road. To say the least, there is never a dull moment!

The dress: In India, it is said that you dress to other people’s liking as opposed to your own. The style of dress is extremely flashy and colorful. The woman’s outfit consists of a kurta (long top), pajamas (bottoms), and a dupata (scarf). The more traditional women also wear sarees. The men also wear long kurtas and loose fitting pants. More traditional people tend to wear the Indian garb, but the modern generation is often found in jeans and a long sleeve sweater (its the winter here). Married women wear a bindi and a nose ring. Most importantly, the dress is influenced by a level of conservatism. The women are always covered. Although it is acceptable to show your midsection, showing leg is an absolute no no. Additionally, India has the second largest population of Muslims in the world, the first largest being Indonesia. This adds to the level of conservative dress. I have bought some beautiful clothing items that I cannot wait to share with you all at home!

The food: The diet is different from what I had expected. They eat a tremendous amount of carbs, butter, milk, and sugar. Every meal, yes, sometimes that includes breakfast, consists of either rice, roti / chopati (tortilla), da (lentils), a vegetable dish (so far it has been mostly potato because we are in the winter season), chai tea, and a few raw vegetables (normally either onion, tomato, or red carrot). The majority of people are vegetarians. The Indian version of vegetarian also eliminates eggs. My family happens to eat meat, but the way that they eat meat in India is very different from the states. Meat is a small addition to the meal, rather than the focus. And it is very very rare. I would say that wealthier families, if they do eat meat, they eat it about twice a month. Beef is never eaten because the cow is considered to be sacred. The punishment for hurting a cow is imprisonment. Cows have free reign of this city.

Also, everything that I eat has to be prepared in a special way so that I don’t get sick. Each item is carefully washed in water that has been treated with bleach. The program center has a cooking staff that cooks lunch for us every day, and then I have dinner with my host-family around 8:30 every night. The food is delicious, but its starting to get a little tiresome. I have a long way to go, so for now, I will be dreaming about a hamburger with blue cheese and caramelized onions and a beer, Chicago deap dish pizza, my Nonny’s spaghetti, my Grandma’s chocolate cake, my mom’s green meat stew….

The noise: I mentioned that people are constantly honking their horns. That’s just the beginning. Indians do not have volume control. They yell instead of talking to one another. When they watch TV, the volume is turned up so loud, it sounds like they are hard of hearing. Occasionally, people will blast pop music and play Indian drums as we are trying to fall asleep. The other day, I went to go and do some work at Cafe Coffee Day, the equivalent of Starbucks in the states. It was impossible to concentrate because the cafe was blaring pop music so loud that I couldn’t hear myself think. At least in Delhi, people appear to be less sensitive to sound than we are in the states.

The Metro: The Delhi metro is the nicest form of public transportation I have ever used. It’s brand new, above ground, and provides a great view of the city. Each time we enter the metro, our bags are scanned and we go through a security check.

The animals! There are dogs, cows, and pigs everywhere! And even the occasional monkey!