A Pedagogy for the Encounter Between Artistic Expression and Jewish Life 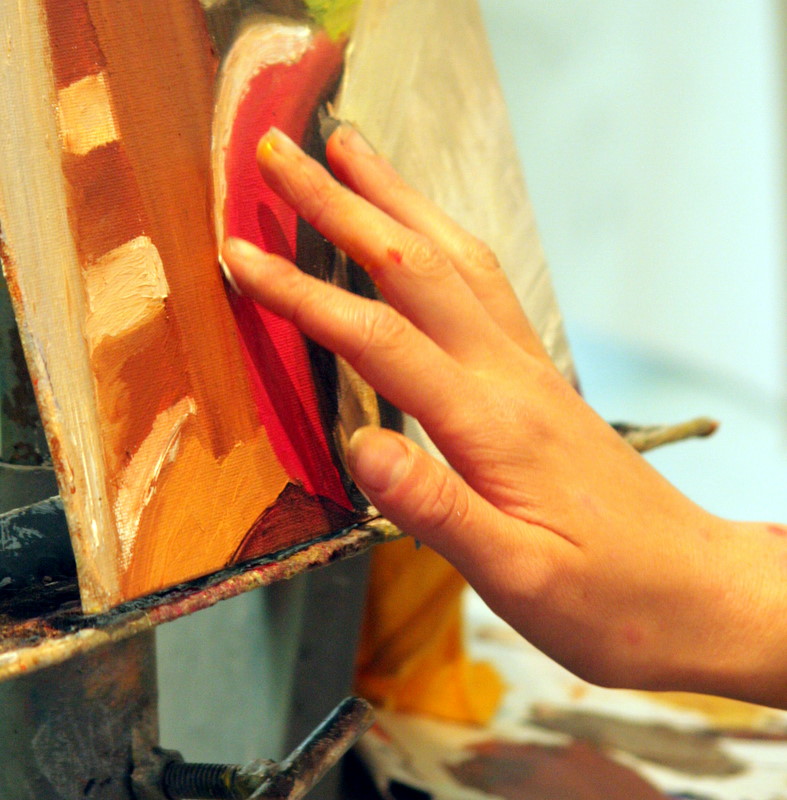 By Orit Kent and Allison Cook

This summer, we made the trip out of our office and across the Brandeis campus into dance studios, fine art studios and music rooms to consult with the community educators of BIMA’s Summer Art Institute for Jewish teens. We shared our research and engaged the educators in specific aspects of our “havruta inspired pedagogy” [PDF] in order to help them design and implement the program’s artists’ beit midrash, a distinguishing feature of the BIMA program.

The artists’ beit midrash merges the activities of a “house of study” of Jewish texts with the activities of an artist’s studio. As such, it is meant to create the conditions for fulfilling BIMA’s mission “to guide high school students as they develop their imaginative and artistic faculties and to explore the relevance of Jewish tradition in their lives.” In small groups headed by BIMA community educators and artists, teens worked to explore both an artistic medium of their choice and Jewish texts and stories.

Our role was to help the community educators practice a pedagogy for cultivating the “serious and dynamic encounter between artistic expression and Jewish life” that is part of BIMA’s mission and plan for leading the teen groups.

In our session with the educators, they asked: “Should Jewish text study inform the teen’s artistic creations or should their artistic expressions inform their study of texts?”  Our work with the educators was in large part to reframe this very question.  We proposed that the real value of the artists’ beit midrash was as a space that holds together the young artists’, the Jewish sources and their art in ongoing conversation, without losing the ‘voice’ of any of these distinct partners.

Together with BIMA director Rachel Happel, we anticipated potential points of entry as well as likely barriers that teens might experience as they participated in this “conversation” with their peers, the Jewish sources, and their art work. We expected that teens would be motivated and energized by social connections with peers, and by the artistic opportunities for self expression that the artists’ beit midrash would afford them. We also predicted that these social and creative interests might unintentionally risk driving out the Jewish texts and sources

We therefore modeled a purposeful and scaffolded process for interpreting and engaging with both the Jewish sources and the artistic process so that young artists might pursue their art with ongoing consideration of the text in its particularity of form and content. The educators experimented with different adaptations of our frameworks when they worked with the teens.

In reflecting on the work of the artists’ beit midrash afterward, the educators looked to their participants’ artistic creations—in the form of song, music, dance, writing, and fine art—for expressions of the full “conversation” among the young artists, their art, and the Jewish sources.

One educator commented on the Artists’ Beit Midrash culminating showcase event: “I was watching their performances and seeing their exhibit of work. It was very clear to me that it had been a rich experience with the sources and that that had carried through into their projects…and seeing interpretations of different sorts. There were a number of sources that different participants chose and to see the different interpretations using different art forms or even the same art form was also really rich.”

Another community educator highlighted a specific example of a song that a teen had composed about David and Goliath. He said, “It really sank in more that this was a rich interpretation of that text for him, and I encountered the story in a new way as a result of his midrash.”

Designing the Artists’ Beit Midrash to facilitate the mutually informing “encounter” among teen  artists, art, and Jewish texts was challenging and rewarding for the educators. Josh Mocle, the community educator who led the creative writing group, confessed with good humor that he was initially terrified by this challenge. However, in the forward to his group’s literary anthology, he went on to write that, “[R]ight from the beginning it was clear that I had hit on something special. Whether they knew it or not, our group of thirteen had a spark, a yearning to see things differently. To view the Torah and other Jewish texts not as finite tomes, but living, breathing history waiting for their voices to be added to it… At the end of the day, there was only us, the text, and the limitless possibilities provided by our art form.”

Story, Language, Love: Three Modes for a Pedagogy of Peoplehood