What I’ve Learned About Jewish Identity

What did I learn from the conference on Rethinking Jewish Identity and Jewish Education a few weeks back? 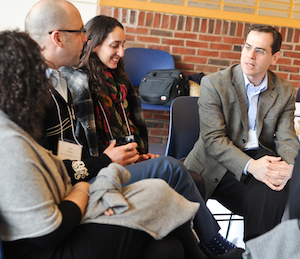 The first thing, which actually occurred early in the process of planning the conference, is that my colleague Ari Kelman and I are not the only ones troubled by the concept of Jewish identity. Far from it. We received more than twice the number of proposals than we could accommodate, along with dozens of requests to join the conversation in other ways.

Clearly, a lot of people are concerned about the ways that the Jewish community talks about Jewish identity and Jewish education. I do not assume that everyone agrees with my critique, of course. But they all think that this is a topic worth pursuing.

The second lesson, then, is that the nature of the dissatisfaction differs from scholar to scholar and discipline to discipline. For some, the problem with talking about Jewish identity is that it’s hard to measure. For others, the problem is the very idea of a single, unified Jewish identity; actually, we all inhabit multiple identities, these days more than ever. Others notice that identity is sometimes used to divide those who are assumed to have “strong identities” from others who do not.

Others point out that the concept of Jewish identity has a history; it emerged at a particular moment in time, in the post-war era, among a certain set of assumptions about suburban bourgeois Jewishness. The language of identity, while ostensibly neutral, is actually a kind of implicit endorsement of a tragically anemic pattern of Jewish-but-not-too-Jewish commitments.

Still others are concerned about the zero-sum-game assumptions of Jewish identity discourse, as if the big educational goal of the Jewish community is to make Jews more Jewish than … what? More Jewish than Christian? That’s just silly. Whatever the challenges facing contemporary Jews, becoming Christian is not one of them.

A third – and for me, this is the most important one – has to do with alternative ways to think about Jewish educational outcomes. If Jewish education is not about strengthening Jewish identity, then what it is about? How can we articulate the desired outcomes of Jewish educational projects and programs without resorting to claims about identity?

Well, here are a few possibilities. Bethamie Horowitz would like us to think about agency, that is, what it’s like for an individual to feel a greater sense of personal empowerment as they pursue their Jewish lives. Along similar lines, Shaul Kelner suggests that we ought to develop our understanding of subjectivity: what it means to be a subject rather than an object, to be Jewishly active rather than passive. For scholars like Sarah Benor and Sharon Avni, language is key, and so perhaps we ought to be conceptualizing the outcomes of Jewish education in terms of fluency – not just fluency in Hebrew or other Jewish languages, but fluency in metaphorical languages as well. (What does it mean to speak the language of Jewish learning? Of Tikkun Olam? Of Israeli dance?) And a number of us are particularly committed to thinking about Jewish education as an initiation into a set of Jewish practices.

Of course, there’s a lot of work to be done, to flesh out these concepts, to test them in the world, to see whether they can be operationalized as ways of assessing the outcomes of actual Jewish educational projects and programs. Those are the next steps.

A friend of mine accused me of wanting to ban the use of the term “Jewish identity.” Not true! I don’t want to ban it. I just want us to use the term much more carefully than we currently do.

So, what is “Jewish identity”?

The problem is that that’s almost never what we mean, in the Jewish community, when we talk about “strengthening” or “cultivating” Jewish identity. We mean something more like “make them more Jewish.” But without articulating what “more Jewish” means, we’re avoiding all the hard questions. That’s intellectually lazy, and it’s particularly unhelpful when it comes time to figure out whether our Jewish educational projects and programs are doing whatever it is we want them do.

So next time you hear someone using the term, ask yourself: What do they mean by it?