The Persistence of “Identity”

This guest post is by Jonathan Krasner of Hebrew Union College. He is a visiting scholar at the Mandel Center this year; next year, we will welcome him to Brandeis as the Jack, Joseph and Morton Mandel Chair in Jewish Education Research.

In 1994 Leon Wieseltier declared in the New Republic that identity was “an idea whose time has gone.” Twenty years later the Jewish identity industry is still going strong. 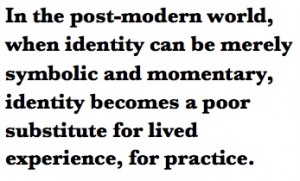 I recently had occasion to reread Wieseltier’s article in preparation for a conference on “Rethinking Jewish Identity and Education” at the Jack, Joseph and Morton Mandel Center for Studies in Jewish Education at Brandeis University. Listening to the various panel presentations and the vigorous discussions that ensued, it was clear to me that Wieseltier underestimated the enduring power of identity as a concept, particularly within the North American Jewish community. As the opening conference statement made clear, “With the possible exception of ‘continuity,’ identity (and the attendant fears of its disappearance or weakening) has driven more philanthropic initiatives and educational policy than any other single concept.”

With funders and community leaders eager to shore up the Jewish identities of millennials and their younger siblings, there is plenty of money to be had and made in the Jewish identity industry. Hence my quip at the conference that “Jewish identity has basically become the crack cocaine of the Jewish educational world.” Everyone from Birthright trip venders to Jewish boutique camp directors is fishing for a piece of the action. And who can blame them? Many of these good folks are incubating innovative and potentially transformative initiatives. If wrapping themselves in the banner of Jewish identity enrichment can win them dollars in a time of otherwise dwindling resources, where is the harm in shopping their products as Jewish aphrodisiacs that will encourage endogamy and result in lots of Jewish babies?

But let’s return to Wieseltier. Before we chuckle at his obtuseness we should pause to revisit his reasoning. By 1994 it was clear to Wieseltier and others, including the late cultural theorist Stuart Hall and sociologist Herbert Gans, that longstanding assumptions about identity were outmoded, particularly in western societies. It turned out that identity was fluid rather than stable, transient rather than enduring, hybrid and overlapping rather than distinct and impermeable. Moreover, individuals inhabited multiple identities and often treated ethnic identity symbolically. Decisions about which one(s) to emphasize were provisional, situational and circumstantial in nature. Wieseltier, who was by no means sanguine about these revelations, logically reasoned that if developmental psychologist Erik Erikson was correct that “identity formation begins where the usefulness of multiple identification ends,” than identity as a concept was past its expiration date.

Erikson introduced identity in the 1950s as an antidote to anomie and alienation, the scourges of modern civilization. But if the self turns out to be protean rather than fixed, then why has identity endured? Part of the answer is supplied by Wieseltier himself: Even if identity is a fiction, it is a useful fiction. In describing the modern condition he pointed out that “we are unprecedentedly dispersed and unprecedentedly distracted.” This is even truer today than it was twenty years ago, as a result of globalization and advances in information technology. Even memory, “which confers a sense of continuity … is disappearing beneath the assault of associations. We are carrying too much. We are falling out of our hands. We need a basket. The name of the basket is identity.” Wieseltier is providing an important insight into why much of the contemporary discourse on identity has been patently ignored by Jewish educators on the front lines. Parents, educators, communal leaders and funders want to believe, and even need to believe in the basket called Jewish identity. The alternative is too messy, too overwhelming, too threatening.

As much as some of us, including myself, chafe at the persistence of identity and the simplistic way that it often conceptualized by stakeholders within the Jewish community, we ignore its continued allure at our peril. The price of abandoning identity discourse may be our irrelevance, that is, the continued chasm between the academy and the street. We can try to influence that discourse in ways that seek to educate practitioners, funders, community leaders and others.

Perhaps the message we should be driving home is that in the post-modern world, when identity can be merely symbolic and momentary, identity becomes a poor substitute for lived experience, for practice. Measuring people’s feelings might have been an important corrective for sociologists whose survey instruments measured identity purely in relation to ritual practices and friendship patterns. But people’s feelings do not get us very far. The vast majority of North American Jews have positive feelings about their Jewishness. But that does not mean that Jewishness plays an important or even meaningful role in their lives. As Wieseltier writes, “An affiliation is not an experience. It is, in fact, a surrogate for experience. Where the faith in God is wanting, there is still religious identity. Where the bed is cold and empty, there is still sexual identity. Where the words of the fathers are forgotten, there is still ethnic identity. The thinner the identity, the louder.”