The Blessing of Relationship

My toddler and I were outside of our house, drawing on the sidewalk with chalk, as we often do while my husband puts our baby to sleep. Out of nowhere, after weeks of drawing tic-tac-toe boards and hopscotch courts, my daughter drew two circles, connected them with a line, and said, “Look, Mama! It’s a car!” 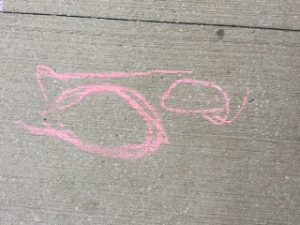 In that moment, I experienced a new kind of parental joy.  My child, unprompted, had reproduced a key illustration of my most beloved scholar’s work, an idea which sits at the center of my research.

The scholar, Gunther Kress, described the drawing of a 3-year-old boy who asks him, “Do you want to watch me? I’ll make a car.” He proceeds to draw a bunch of circles, and then proclaims to Kress, “This is a car.” Kress explains, “All of us act precisely in this fashion in making signs. We never represent the ‘whole object’ but only ever certain criterial aspects… Wheels may be plausible as a defining feature of cars for many 3-year-old children” (Kress, 1997, p.11). Kress argued that teachers and adults must attend more carefully to the sign-making practices of children and work to value their nascent interpretive stances. In my previous work, I applied Kress’s theory to elementary Tanakh classrooms as I explored the ways that students make sense of these texts.

In my excitement at seeing my daughter’s sign-making in action, I may have forgotten to foster her growth mindset and instead marveled out loud to her about her innate talent. But as I reflected on the moment, I realized that I had arrived at a  whole new layer of understanding Kress’s argument. His example demonstrates how in the mind of a particular child a pair of circles comes to represent a car because the child sees the car’s wheels as its defining characteristic. Kress’s theory, however, offers little about the cognitive processes through which the child formed his “car schema,” that is, his abstract conception of a car through which any particular car is transformed mentally into wheels and on the page into two roughly drawn circles.

In the case of my own daughter, I had witnessed the genesis of her car schema. I remember the long phase in which her favorite stroller conversation was my asking “Can you find a red car? Can you find a blue car?” followed by her pointing to a red car and a blue car. I knew That’s Not My Train, in which a conductor notes the differences between her train and others, finally finding her own (it’s the one with the shiny engine). I knew every toy car she’d ever been in.  This history and the depth of knowledge I had of my daughter, the interpreter, added a rich layer to the moment of her communicative and interpretive act of drawing a car.

Teachers, tasked with teaching children to interpret, have an intimacy with their students that allows them to understand their interpretive processes in ways no educational researcher could. Little by little, I have realized that without getting to know children as interpreters on a deep and intimate level, I will never be able to answer the questions I have about how young children make sense of biblical texts.

Whether it emerges out of the responsibility for the youths’ development (intellectual, moral, social, and spiritual) or from the more mundane reality of the daily time together, anyone who has taught in a classroom knows that there is an access to understanding that teachers have that even the best researchers and observers can’t attain. Of course, there is an access to perspective that the distance of a researcher/observer gives that is also extremely valuable.  But if the objective is, as mine is, to understand students’ interpretive interests and processes, then the intimacy of the teacher-student relationship seems essential.

Over the next year, with the support of the  and the Sylvia and Moshe Ettenberg Research Award of the NRJE, I will be returning to the classroom as a middle school Tanakh teacher. I will get to know and document the development of my students’ interpretations as they study biblical texts with me and their classmates. This research is rooted in the flash of insight I had when my daughter drew a car for the first time: To understand children as interpreters of their world, you have to get to know them.

Ziva R. Hassenfeld is a post-doctoral fellow at the Mandel Center and recipient of the 2017 Sylvia and Moshe Ettenberg Research Award.

Pedagogy of Partnership and the Power of Relationships