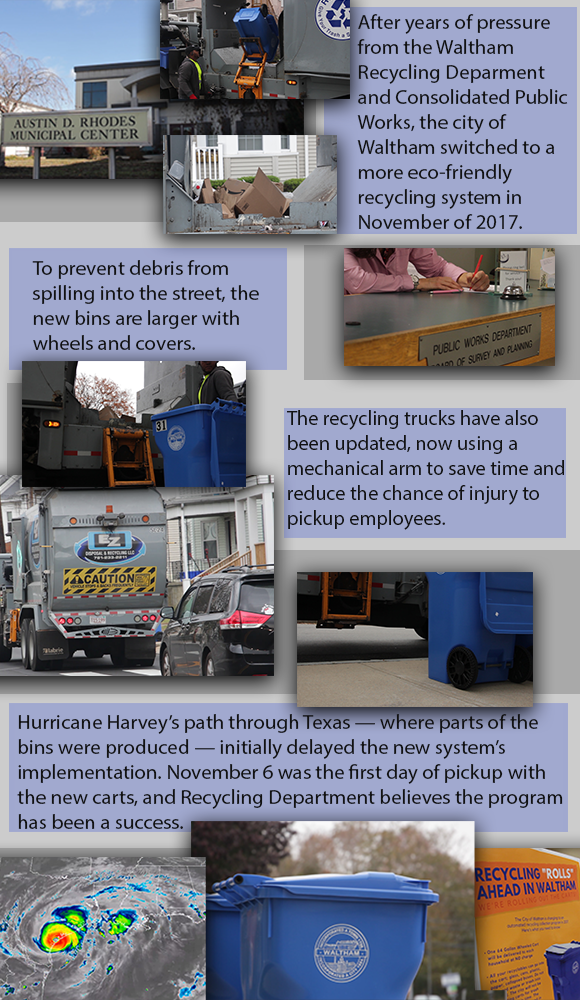 For my second proposal, I am going to recycle my Waltham Recycling Department pitch (ha). Waltham is in the process of updating its recycling bins, and some residents have contacted the department in confusion or anger. I want to make use of this initial narrative to interview people in the Public Works Department (which oversees the recycling office) and report on their work, initiatives, and public responses. One of my friends is currently interning in the Recycling Department, and I think the view of a Brandeis student embedded in Waltham city government would make for a unique perspective. It might also be interesting to find out exactly how much Brandeis students know about local Waltham government and specifically the Public Works Department, and if this differs among students who live on or off campus. I think that Public Works might be interested in learning about how much Brandeis students know about its work, and if there anything they or the University can do to create stronger relationships to jointly benefit Waltham and Brandeis.

Citing heightened sensitivity to recent political activity in Washington and a multicultural student body, Brandeis University Professor of Politics Kerry Chase contends that there has been an upswing in political engagement and interest on campus. This phenomenon, he says, is observable in class enrollments and activism, as well in students seeking to understand the political foundations and theories that help explain current events.

The first story I am considering is examining enrollments in the politics major at Brandeis to determine if there are trends or correlations with any discernible, heightened moments of political interest in recent American history. A few politics professors have noted that lately their class sizes feel unusually large, and as of late, politics feels like an especially salient topic in media, culture, and conversation. I would like to find out if there is in fact a relationship between enrollment and traceable moments of political interest. Time periods of political interest might be identified by looking at google search trends or some other available data set. Appropriate interview subjects for this project may include a representative from the office of the university registrar, the politics department chair, or the politics department administrator. This story would also require examining changes in total undergraduate enrollment at Brandeis so as to not inaccurately represent the significance of shifts in major enrollment. Examples of possible photos include a lecture hall with seats filled for a politics class; students in the politics department office, meeting with professors, or in a hall waiting for office hours; the collection of books authored by politics faculty on display in Olin-Sang; and shots of an event hosted by the politics department.

My second story idea is interviewing a friend who is currently interning at the Waltham Recycling Department. My friend told me that Waltham changed its recycling bins recently, and some residents called the department in confusion and even anger. I should be able to find information specifically about recycling programs and data in Waltham, and information about the Waltham Public Works Department as a whole. This is completely my own guesswork, but it seems that many Brandeis students, despite living here, do not necessarily know much about Waltham as far as local government and operations. I think the views of a Brandeis student embedded in Waltham city government would make for a unique perspective. If my friend does not feel comfortable or qualified, I am sure that she can connect me with another employee in the department to interview. Pictures can include shots of the interior or exterior of the Public Works Department; photos of the Recycling Department; employees at the Recycling Department; the new recycling bins waiting for collection; and images of Brandeis students who live off campus handling their recycling or some other public works related issue.

My interests as a journalist are politics, global and national events of interest, and New Jersey politics and events (my home state). When I studied abroad in London last fall, I had the opportunity to write about developments in technology, sports, and the intersection of those two topics, which I also greatly enjoyed.

I have had a few Politics Department professors joke that they have  had especially large class sizes in the past two semesters. I think there might be a story in regards to Brandeis major enrollments potentially reflecting changing patterns in attention paid to various issues over time. The Registrar might have relevant historical data for this sort of  story.

Another story I am interested in is examining some of the older plans for Brandeis and the campus that can be found in Archives and Special Collections, especially as the university prepares for the construction of a new dorm.

Earlier in the week, the New York Times published a story about a man herding cattle to safety via helicopter as the cows have been displaced by Hurricane Harvey. I found the story particularly interesting as the reporting crossed into a number of news coverage categories: the human interest element of a noble individual in the wake of disaster, the economic side of the Texas beef industry at risk, and action photos of a helicopter soaring above cows in shallow water. The article was accompanied by a number of photos, and I felt that the visual element was important in this particular story for illustrating something that many people, myself included, might not have seen in the past.

On campus, the women’s soccer team hosted its first home game on Tuesday night. Brandeis won 2-0 with both goals in the second half. Additionally, there was an orientation week tailgate prior to the match, and any campus event offering free food can do no wrong.