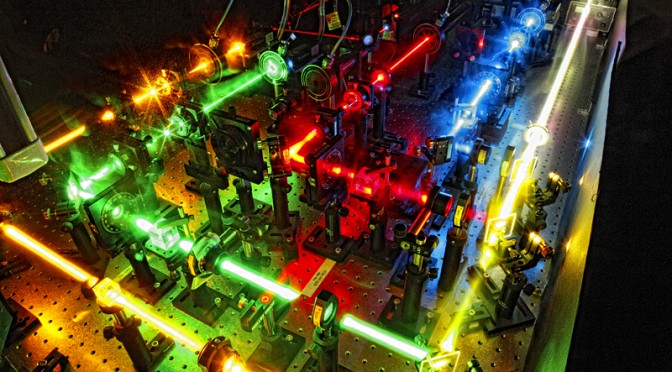 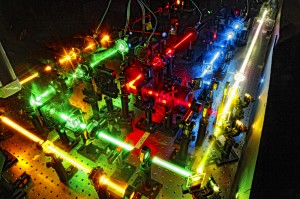 Working with biochemistry professor Jeff Gelles, Brandeis research scientists Larry Friedman and Johnson Chung built a novel light microscope that uses multiple laser colors to examine the behavior of individual protein, DNA and RNA molecules. The researchers tag molecules with fluorescent colors, enabling the microscope to reveal the workings of the molecular machines that control the architecture of cells and regulate genes.

In a noisy restaurant, isn’t it a lot easier to hear someone if you can see their lips moving? That’s because our brain’s audio and visual centers are deeply connected, allowing for multisensory integration.

As a senior at Brandeis University, Avi Aizenman ’13 wanted to know if musicians were better at exploiting that connection than non-musicians. Aizenman, a long-time flautist, thought they might be. Turns out — she was right.

Aizenman turned that idea into her senior thesis, which she presented at the 2013 meeting of theVision Sciences Society, and is now submitting to a scientific journal. If the paper gets accepted, it will be her third published paper in two years. Not bad for a student who didn’t want to study high-level brain processing a few years ago.

When Aizenman transferred to Brandeis as a sophomore, she was interested in social psychology, how thoughts and behaviors are influenced by the presence of other people. This changed when there was an opening in professor Robert Sekuler’s vision lab, an opportunity too good for Aizenman to pass up.

As the only undergraduate in the lab, Aizenman spent her time working directly with graduate students and postdoctoral fellows.

“At first, it was intimidating,” Aizenman recalls.  “But it was amazing how quickly I caught on. It gave me so much self-respect and confidence to be able to present my work with people who had so much more experience.”

To answer this question, Aizenman needed to recruit groups of student musicians and non-musicians, which turned out to be harder than she anticipated.

“Brandeis is so full of over achievers in the best possible way, it was hard to find someone who didn’t play an instrument,” Aizenman laughs.

Eventually, she found 14 non-musicians and 14 musicians, with at least six years of musical experience. She gave each group a test measuring their ability to identify which fast moving visual, audio and audiovisual sequences repeated identically.

She found that not only were musicians significantly better at remembering and identifying repeating and non-repeating auditory sequences but they were also better at visual and audiovisual sequences.

“It’s pretty amazing,” Aizenman says. “Music unifies the brain in a way that almost nothing else does.”

Of course, Aizenman notes, correlation doesn’t imply causation, so more research needs to be done to better determine if and how studying music shapes the brain’s relationship between audio and visual stimulation. It may be that someone begins playing an instrument and sticks with it partly because they are good at processing rapid sequences naturally.

Aizenman, who works as a research assistant at Brigham and Women’s Hospital Visual Attention Lab in Cambridge, hopes to pursue that question and others when she goes to graduate school in a couple years.

Be sure to look for her name in the journals.