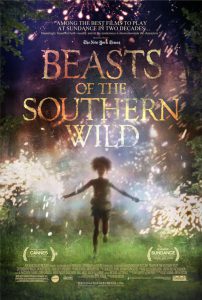 Beasts of the Southern Wild, director Behn Zeitlin’s critically acclaimed 2012 film, is set in a nominally fictionalized flood plane portion of Louisiana called the Bathtub. The film is notable for its Post-Hurricane Katrina treatment of poverty as a vulnerability to environmental disaster. That disaster is registered in the film by the concrete and realistic depiction of the region’s levee system and the fantastical depiction of thawed ice age predators caused by the melting polar ice cap. The film, in its attempt to depict an empowered poor not victimized by climate change and government inaction, shows the Bathtub’s residents actively attempting to evade the government and medical community’s intrusions. Both are depicted as obstacles to the “flow” of natural events like flooding and death. Rather than being unable to escape before the storm hits, the fictional Bathtub’s residents who remain do so in gleeful defiance. When the prehistoric auroches, the extinct beasts unleashed as a direct consequence of global warming, finally makes its way to the Bathtub in the film’s climax, after having been viewed through much of the film tramping across earth and sea, they kneel at the feet of the film’s protagonist, Hushpuppy, who has proven herself to be the tougher animal. Beasts of the Southern attempts to depict a poverty marked by joy rather than lack, and rather than pitiful victims of governmental neglect the poor residents of the Bathtub want only to be left to their many holidayed devices.