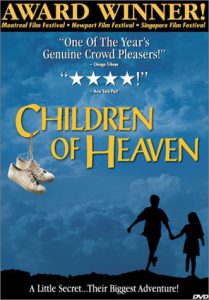 Children of Heaven (1997) is an Iranian film directed by Majid Majidi which depicts the story of two young poverty-stricken siblings who must navigate life sharing a single pair of shoes. The film is a production of Iran’s Institute for the Intellectual Development of Children and Young Adults. With a relatively low budget ($180,000), the film features many amateur actors and was filmed in secret in order to provide a realistic depiction of poverty in Tehran. It is historically and culturally notable for being the first Iranian film to be nominated for an Academy Award (Best Foreign Language Film, 1998). The critical response to the film was largely positive, with some critics comparing it to Vittorio de Sica’s Bicycle Thieves (1948) due to its neorealist influences. Children of Heaven is deceptively simple and offers a poignant glimpse at poverty in the poor neighborhood of South Tehran. More specifically, the depiction of poverty is largely filtered through the perspective of children. The film celebrates the importance of family, especially the bond between brother and sister who must unite in order to negotiate the consequences of their poverty. It chronicles the struggle and instability that poor Iranians must face on a daily basis. While its ending is somewhat ambiguous, the film’s authentic portrayal of poverty ultimately suggests that it is both inevitable and difficult, perhaps impossible, to transcend. The film implies that family ties and personal determination are necessary to cope with socio-economic hardships. However, in the end, the film posits that neither is an effective solution for extreme poverty.