“Heaven Knows What: Exploring The Minds Of The Homeless” by Koonhow Goh 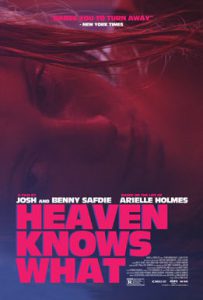 Heaven Knows What is a 2014 American drama film directed by brothers, Ben Safdie and Joshua Safdie. The film is loosely based on actress, Arielle Holmes’ life as a homeless heroin addict in New York City. The narrative of the film revolves around Harley (Arielle Holmes) and her obsession for all the things she loves, her boyfriend Ilya (Caleb Landry Jones), heroin, alcohol, her friends and the freedom of being homeless. The film portrays the extremity of romance of the homeless in New York City and the destruction love can cause to the individuals.

The film started with Harley attempting suicide after an enraged Ilya forced her to kill herself. Harley was eventually sent to the psychiatric ward and upon release, she met up with her friend Mike (Buddy Duress) who happened to be her drug dealer. Holmes then drifted away from Ilya after her release from the psychiatric ward and stayed close to Mike because of his access to heroin and alcohol. It was until Mike and Ilya were caught in a fight, while Mike was injured, Ilya suffered from an overdose the same night Harley was helping Mike with his injury. This was when Harley realized she still love Ilya and ran over to rescue him. The two then eventually booked a bus to runaway from New York City. Ilya then ditched Harley on their bus to Florida and accidentally set himself on fire.

The film explores the mind of Arielle through the use of the film’s cinematography. The abstract concept of emotions and feelings are often difficult to be represented through the visual image. Using different film techniques, such sound, color editing, lighting, the directors presented the mind of Arielle to the audience in an immersive manner. The overall voyeuristic touch to the cinematography and the director’s surrealistic style help the viewers visualize the pleasure Arielle experience under the influence. The directors’ depiction of pleasure and gratification took a great leap forward from their past film The Pleasure of Being Robbed, which explores the mind of a kleptomaniac. While both films deal with the theme of obsession and self-gratification, the meticulous editing of Heaven Knows What makes the film much engaging as the film appears to be less monotonous.

The film was produced when director Joshua Safdie met Holmes on the subway, while researching for another film about the Diamond District in New York City. Mistaken her as a Diamond District girl, Safdie approached her to ask if she wants to be on his film. Upon their next meeting, Safdie learnt that Holmes was homeless and eventually asked her to keep a journal for he might use it as material for the film. Safdie then casted Holmes to play herself, while casting her other homeless friends in the film as well.

Despite most of the scenes were shot in the streets of New York City, unlike many other cinema vérite films like this, Heaven Knows What, was shot with extensive equipment. The directors wanted to push the limit of shooting the streets with space constraint on the production team. This resulted in a relatively voyeuristic style, which plays well with the theme of the film. The film was released on May 29, 2015 in selected cinemas in the United States and rake up a box office of $63,776. While the film was faced with limited success in its mainstream release, its reception amongst critics and the independent film festival circuits were met with raging success. The film first premiered on the 71st Venice International Film Festival on August 29, 2014 and was later circulated around other international film festivals around the globe. It also won the Grand Prix Award and the Best Director Award on the 27th Tokyo International Film Festival. While film critics Kenji Fujishima and Jordan Hoffman have both praised Holmes’s performance and the depiction of homelessness in New York City. The Safdie brothers eventually paid for Holmes to received treatment after the production of the film and upon completion of her treatment, Holmes has been casted in many other upcoming films, including Andrea Arnold’s American Honey.