“Magic and Unreality in Boy” by Niki Laskaris 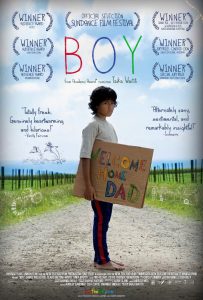 As Octavio Paz described in his piece “The Day of the Dead,” each culture and people have deep psychological needs. “The Day of the Dead” is a festival of enchantment which helps the Mexican inwardly, that is to say it helps him “escape from himself” and from the “poverty and misery.” This fiesta’s “violent primary colors, their bizarre costumes and dances, their fireworks and ceremonies” make it somewhat of a magical event, removed from dismal reality. Magic both in this sense (as a withdrawal from the natural world into something almost supernatural) and the literal sense (sorcery/witchcraft) is common among poor people and poor nations. As a last desperate attempt at hope and happiness, some of the most impoverished nations have complete faith in cultural phenomena like the Harry Potter series, and this faith has become a serious issues in these areas.

In Boy by Taika Waititi both Rocky and Boy, poor Māori children from the Bay of Plenty in New Zealand, use some form of derealization or untruth in order to slightly unburden themselves of their rather gloomy lives.[1] Rocky believes he has unearthly powers, while Boy lies almost to a pathological extent, apparently convincing both himself and sometimes others. As Boy is both a comedy and centered on children, it was difficult to remove these pathological or psychological aspects of Rocky and Boy (compulsive lying and belief in magical powers) from the lightness of the film and of childhood in general, though I absolutely do believe there is truth to the claims made in this video. Children behave and emotionally react to situations just as much as, if not more than adults do, though I don’t believe they are taken seriously enough since they are “just children” or “don’t know what they’re doing.” I would be so interested to see Rocky and Boy in young adulthood.

The film is set in 1984, a time of great economic and social reform in New Zealand as they sought to liberalize their economy which, during the mid-20th century, consisted of exportation of pastoral-farming products.[2] The film took home ten awards from eight different film festivals, three from the New Zealand Film and TV Awards and became the top grossing New Zealand film to be shot on home soil. It is said to be a project very close to Waititi’s heart; he is from the Bay of Plenty and was of similar age to Boy in the mid-1980s.

[2] This prosperity continued until 1955 when Britain (formerly the Mother Country to NZ) stopped giving New Zealand set prices for its exports. Thereafter, what New Zealand received was controlled or decided by the free market. As a result, during the 1950s and 1960s the country’s standard of living began to decline as the export sector could no longer finance the level of imported goods required to meet the country’s growing consumerism.