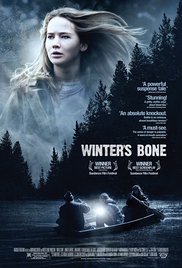 Winter’s Bone (2010) is an independent American film directed by Debra Granik and adapted from Daniel Woodrell’s novel of the same name. It depicts the perseverance of seventeen-year-old Ree in her quest to find her father who jumped bail, as she navigates through the patriarchal and oppressive world of her clan, while revealing dark secrets and subverting gender roles that are stripped off their traditional definitions. With a two million dollar budget, the film first saw financial difficulties, which allowed for two years of research and scouting in Missouri’s remote mountain region of the Ozarks. The filmmakers gained the trust of the locals, and shot the film on private properties with a mix of professional and local nonprofessionals. The creators also studied various films and employed their filming techniques: The use of natural light in The Piano; Bruno Dumont’s de-saturated, lyrical landscapes; and the handheld camera movement in Jean-Pierre and Luc Dardenne’s early films. The film received widespread critical acclaim. It won both the Grand Jury Prize and the Waldo Salt Screenwriting Award at the 2010 Sundance Film Festival, and received four 2011 Academy Award nominations, including Best Picture and Best Actress.

Set in a rural community in which the main income is the drug manufacturing and trafficking, Winter’s Bone represents relationships between women of the same clan, and examines one’s ability to subvert oppressive definitions of male and female. After her father put up all the family’s possessions as collateral for his bond and disappeared, Ree was left with only two options: to run away from her troubles and join the army, or to allow her maternal instinct to show, and protect her little siblings, while fighting against her role in society as defined by men. While the women in Ree’s extended family lack traditional feminine characteristics, they are portrayed as subversive to men. The strong and independent Ree undercuts the clan’s consensus of female roles, insomuch that she successfully instills in her female relatives the traditional maternalism they are lacking. With various cinematic and filming techniques, the film suggests that Ree’s crisis is embedded in the need for maternal care and feminine attention by its traditional definitions. Employing the symbolic object in the form of Ree’s missing father, as well as mise-en-scène, cinematography, and camera movement, the film implies that traditional feminine influences are crucial for survival. The disappearance of Ree’s drug-dealer father ultimately symbolizes the dangers in lacking maternalism even in a patriarchal world. The resolution to Ree’s conflict teaches that the power of womanhood and motherhood is critical to a family that wishes to be saved from the threats of poverty. According to Woodrell, the film’s title is derived from a slang expression: winter’s “bone” means winter’s small gift or blessing, as in the phrase “to throw someone a bone.” Ree might not escape poverty and may remain dependent on her generous neighbors to share their meat, but her efforts to keep her family house meet with success, and a bone may be just enough to get one through the winter; perhaps family is all it takes to survive through poverty.