Romancing the Slum: Conflict of Cinematic Style and Realism in Slumdog Millionaire” by Paige Eggebrecht 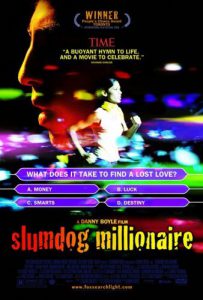 Against early predictions of failure Danny Boyle’s Slumdog Millionaire (2008), was an instant success with British, American, and even worldwide audiences. The film garnered acclaim for its narrative, music, and cinematography laying claim to 8 Oscars including Best Picture and Best Director. Shot on location in India and staring several amateur Mumbai child-actors and envisioning a gritty insider’s view of modern India focusing in turn on Indian corruption and poverty and on the arrogance and exoticizing gaze of Western tourism. Robert Ebert praised how “The film uses dazzling cinematography, breathless editing, driving music and headlong momentum to explode with narrative force, stirring in a romance at the same time” (Ebert). Despite the film’s successes, however, the project has been criticized, primarily by Indian reviewers and critics. One particularly scathing review reads how in the film,“Poverty is celebrated: destitution, squalor, beggar mafia and prostitution stare at us from the frames — magnified to distortion, glorified silly and used as tools of titillation to please the smug white world” (Bhaskaran). Another reviewer, speaking of his own history growing up in the slums writes:“People keep praising the film’s “realistic” depiction of slum life in India. But it’s no such thing. Slum life is a cage. It robs you of confidence in the face of the rich and the advantaged. It steals your pride, deadens your ambition, limits your imagination and psychologically cripples you whenever you step outside the comfort zone of your own neighborhood. Most people in the slums never achieve a fairy-tale ending” (Mazumdar). It seems a difficult task to reconcile the positive and the negative views on the film, which nevertheless is a cinematically fascinating work. The film is both praised and criticized for its apparent universalism and subjectivity. I ask that we consider how the film works to better understand where its project does or does not fail in its project to both provide an insider’s perspective and entice the audience. To do so, in this video I perform a close reading of a scene in the beginning of the film which introduces protagonist Jamal and his brother Salim. This scene is a crucial one for the film both for setting up the brotherly drama as well as giving the viewer their first introduction to the Mumbai slum. I find here that the cinematic elements of the scene and the nostalgia for childhood conflict with the scenes attempt to provide a subjective, realistic introduction to slumlife.