“Stephen Daldry’s Depiction of Poverty in Trash” by Marian Gardner 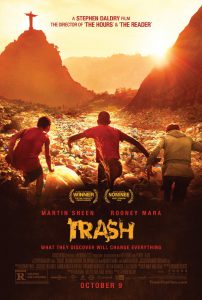 Trash is a 2014 Brazilian- British adventure drama, directed by Stephen Daldry, adapted by screenwriter Richard Curtis, based on Andy Mulligan’s young adult novel also named “Trash”. The film centers around three favela boys; Raphael, Gardo, and Rat, who embark on a dangerous journey to uncover the mystery of a code Raphael found in a wallet in a huge landfill in Rio de Janeiro. The wallet belonged to José Angelo, who was the right-hand man of a corrupt politician. Throughout the film, the boys are constantly running away from policeman Frederico Gonz, who is working for the corrupt politician, and is willing to kill the boys for the wallet. However, in the end, the boys are triumphant, uncovering the mystery of the code and collecting a huge sum of money. The film began production in April of 2011, and in October of 2014, it had its world premiere at the Rio de Janeiro International Film Festival. Then the film was released in Brazil and the United States and was distributed internationally by Universal Pictures. Martin Sheen,  who plays a priest in the film, is a multiple Emmy and Golden Globe Award winner and is one of America’s most celebrated actors, and so his presence in the film helped garner attention to the film. In its opening weekend, the film brought in $10,230. Upon its release, the film received mixed to positive reviews. Trash was nominated for the category of Best Foreign Film at the BAFTA Film Awards and won Best Special Effects at the Cinema Brazil Grand Prize.

The film’s depiction of impoverished teenagers and crime in a favela has caused some critics to compare it to films like the City of God, and Slumdog Millionaire, although it did not reach the success level of either of those films. However, the three young leads, Rickson Teves, Eduardo Luis and Gabriel Weinstein, who were first-time actors, received great praise for their performance, and Daldry has received praise for his depiction of the strong bond between the three boys. At the time of the film’s release, it was alleged that 2,000 cubic meters of “clean trash” were lugged in by the production team to recreate the dump setting (“Trash”, 2015), which created some controversy with some criticizing Daldry’s failure to accurately depict the harsh realities. On the other hand, the film was praised for its action packed scenes, its use of comedy and its positive vibes. Some critics appreciate the film’s effort to move away from traditional poverty narratives, which are often overwhelmed with over-sentimentalization and poverty porn. The film instead portrays a more positive outlook on poverty.

Daldry skillfully utilizes techniques such as plot twists, action scenes accompanied with upbeat music, a sprinkle of comedy, and depiction of beautiful scenery to present an optimistic view of poverty. However as the annotated clip argues, though Daldry creates the expectation that the film would be an informative and honest portrayal of poverty, his overwhelming use of these techniques is solely to entertain viewers and soften a narrative representing poverty. Furthermore, the film’s happy ending contributes to the fantasy theme of the movie and falsely portrays poverty as an obstacle that can easily be overcome. In other words, the film takes its mission of portraying a positive poverty narrative too far. Thus, the film depicts an unrealistic and simplistic view of poverty and fails to provide an honest perspective on the poverty narrative of the three favela boys.