Although the [2 + 2] cycloaddition of alkenes and ketenes to form cyclobutanones is one of the few general methods for the construction of four-membered rings, the intramolecular version of this reaction had been little explored when we started work in this area in the early 1980’s.109 These reactions differ from most other pericyclic reactions in that the ketene is a reactive intermediate, which will either rapidly form a cyclobutanone or decompose. The yield is determined by the relative rate of these two processes.  Alkenyloxyketenes were chosen for the initial exploratory work because the alkenyloxy carboxylic acids were easily prepared by alkylation of unsaturated alcohols with α-bromo carboxylic acids.  The electronic effects of the alkyl substituents on the alkene control the regiochemistry of the cycloaddition and the yield depends on the balance between the nucleophilicity of the alkene and steric hindrance.83,90,109 Leading bond formation occurs between the electrophilic carbonyl carbon and the less substituted double bond carbon. Thus 1 gives 2 in 72% yield whereas 3 affords 52% of 4. trans-1,2-Disbstituted alkenes afford mainly bridged products; cis­-1,2-disubstituted alkenes don’t react as a result of steric hindrance in the transition state.90,114,125  Unsaturated α-chloroketenes can be prepared from either α-chloro acid chlorides and triethylamine or α,α-dichloro acid chlorides and zinc dust and give good yields of bicyclic chloro cyclobutanones.83,99,114,125

Intramolecular cycloadditions of α,β-unsaturated ketenes give more highly functionalized, synthetically useful products from simple precursors.85,88,89,100,101,107,108  These can be classified as type I, II or III depending on whether the tethered double bond is attached to carbons 1, 2 or 3 of the unsaturated ketenes. Furthermore deportation occurs selectively on the methyl group of 8 to give ketene 9 which cyclizes to β-pinene/chyrsanthenone precursor 10.  Deprotonation of trans acid chloride 11 gives cis vinyl ketene 12 selectively. 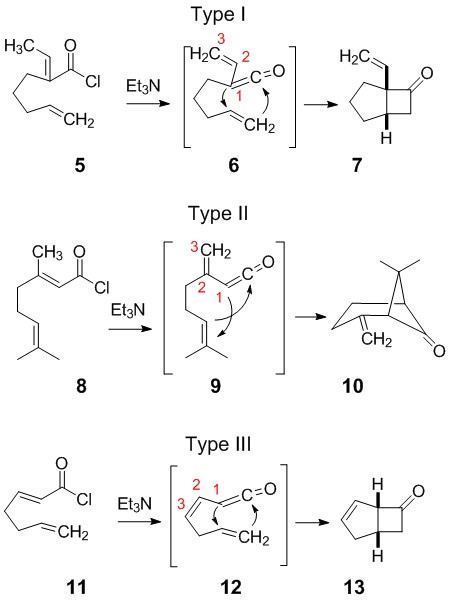 Treatment of 6-(E)-farnesyl chloride (14) with triethylamine provides ketene 15, which cyclizes to 16 in 49% yield.85,89,100  Reduction gives β-trans-bergamotene.  Reductive radical cyclization gives β-copaene and β-ylangene.  cis-β-Bergamotene was prepared analogously from 6-(Z)-farnesyl chloride.  Other applications of these processes include the synthesis of methyl jasmonate106 and isocomene.112