We initiated this project in 1973 to make the readily available carbon-carbon double bond a more useful activating group for the elaboration of the carbon skeleton of complex molecules. We started by examining the AlCl3-catalyzed ene reactions of electron deficient alkene enophiles starting with methyl acrylate,15 methyl propiolate,22 butynone,26 and methyl chloropropiolate.34 Surprisingly, cyclobutenes are formed from terminal and 1,2-disubstituted alkenes with propiolates and butynone.

During the course of this work we found that alkene isomerization, presumably caused by HCl liberated by reaction of Al3Cl3 with adventitious moisture was a problem even under anhydrous reaction conditions.  We therefore looked for a compound that would scavenge HCl but would not interfere with the Lewis acid catalysis.  Eventually, we found that alkylaluminum halides, which were widely available but rarely used as Lewis acids, act as Brønsted bases, as well as Lewis acids.  Thus, the strong Lewis acid EtAlCl2 scavenges HCl to give the stronger Lewis acid AlCl3 and ethane. Thus use of EtAlCl2 as the Lewis acid instead of AlCl3 gave higher yields of adducts reproducibly.34,42,44,52,55,58,67

The use of alkylaluminum halides as Lewis acids allowed us to develop a wide range of ene, Prins, and related reactions.49,55 The alkylaluminum halides cover a wide range of Lewis acidity; replacing chlorines with alkyl groups decreases Lewis acidity. EtAlCl2 is only slightly less acidic than AlCl3. On the other end of the scale, Me3Al is a very mild Lewis acid, with the sesquichloride and monochloride in between. Alkyl donation is occasionally a problem. The ease of alkyl donation is R3Al > R2AlCI > R3Al2Cl3 > R3Al. In addition ethylaluminum compounds are more nucleophilic than methylaluminum compounds and can donate a hydride as well as an ethyl group. 2-Methyl-5-heptenal undergoes a wide variety of cyclization reactions with the product distribution controlled by the alkylaluminum halide used.50

Me2AlCl in equivalent or greater amounts catalyzes ene reactions of aliphatic and aromatic aldehydes with alkenes that can give a tertiary cation.45,46,56,59,67,68,78,81,93  The product alcohol Lewis acid complex is a strong Brønsted acid that will isomerize alkenes.  With Me2AlCl as the Lewis acid, rapid loss of methane gives the stable chloromethylaluminum alkoxide (eq. 1). EtAlCl2 catalyzes the reactions aliphatic aldehydes with terminal alkenes.65

Reaction of 3,6-heptadienyl acetate (1) with excess formaldehyde and EtAlCl2 gives the ene adduct 2, which loses ethane to give 3.  The resulting alkoxyaluminum dichloride 3 binds to formaldehyde to give complex 4, which undergoes a quasi-intramolecular Diels-Alder reaction with the Lewis acid forming part of the tether to give 5, which was used for the synthesis of pseudomonic acid.57,71

Ketones and enones react with two equivalents of EtAlCl2 to give a very reactive C=O•AlEt+ AlCl4– complex such as 6 or 9 that will add to an alkene to give a carbocation such as 7 or 10.  A series of 1,2-alkyl or hydride shifts then occurs to give useful products 8 or 11 stereospecifically in high yield.41,66,76 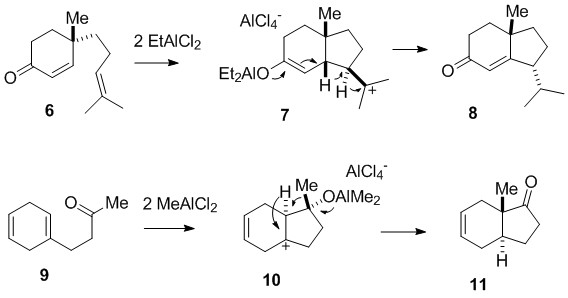