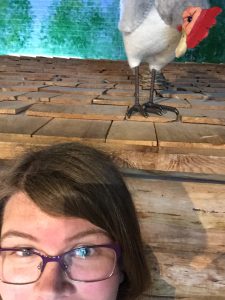 I’ve already been at the Swedish American Museum in Chicago for two weeks, although it feels like a lot longer! The Swedish American museum is a mid-size museum in Chicago that tries to connect people with their Scandinavian heritage as they educate both children and adults on what it was like to be a Swedish immigrant in the United States, describing Swedish-American culture from the nineteenth century to the present. They operate a children’s museum that aims to detail the difficulties and dreams of people who arrived in Chicago (here’s the website: http://www.swedishamericanmuseum.org/childrensmuseum/). Although it’s called a museum, it’s really more of a playground for the kids- with hands on play, they explore what life was like for a Swedish American in the late nineteenth century. However, the museum doesn’t concentrate on solely the past, as they also endeavor to present modern Swedish-American culture, such as the exhibit currently in the gallery, which is about Scandinavian drinking culture (you can check that out here: http://www.swedishamericanmuseum.org/exhibits/currentexhibit.php).

At the museum, I’m a shared intern between the Collections department and the Children’s Museum. My first day, I was dropped head first into my project for the summer in the archives; basically, I’m digitizing records associated with different artifacts. It’s giving me an in depth look at how the cataloguing system at a museum works, which will no doubt be important for my future career as a historian. For the museum itself, though, organization right now is key, as they are in the process of reorganizing the archives. By digitizing these documents, I’m making it far easier to locate forty years worth of information, so that anyone looking can find a description of the artifact itself as well as its history.

When I’m a Children’s Museum intern, I’m actually working on several different projects, such as a revised self-guided tour for adults in the Children’s Museum. Many grown-ups are put off by the sign on the door that says the museum was designed primarily for kids between 6 and 12, even though there’s so much more for people of all ages to learn. I’ve really enjoyed this project because it’s allowed me to explore the Children’s Museum more and get a close look at all the objects that the kids are allowed to handle and play with; it’s helped me build up a cache of facts so I can answer questions by the kids and the parents when I act as a docent. I enjoy this part a lot because it outlines what people are most curious about; since I want to be a historian one day, it’s important for me to know what people are interested in and how they best react to that information so I know how to share what I’ve learned as a researcher.

I’m incredibly grateful for this opportunity to explore my chosen career field more and I’m really looking forward to getting more involved in my projects throughout the summer, as well as getting to know all the super amazing staff and volunteers at the museum!