During the spring semester at Brandeis, I took the course Narcopolitics with Professor Brian Fried. Through this course, I learned about the correlation between drug use and incarceration rates. A recurring issue that we discussed throughout the course was the elevated rates at which children of formerly incarcerated persons are likely to be incarcerated when compared to children whose parents have not experienced incarceration. This comparison shocked me at the time. Currently, I am witnessing the reality of this fact and it is extremely unsettling.

Here is a link to an article that explains the cycle of intergenerational incarceration.

Many of the individuals I work with at Alameda Point Collaborative, a low-income housing community, were previously incarcerated or homeless. The people who attend events through Open Source Wellness are mainly in their fifties and sixties, and many of them have older children who have also been incarcerated. One of the women who regularly attends our events explained her experience with incarceration. She described her long struggle to move past this difficult time in her life because of the legal, social, and emotional restrictions she experienced. Now, her son faces a long prison sentence. She spoke about her inner struggle about the best way to support him, and if she chooses to support him at all. She does not know if she can deal with the responsibility of trying to get him released early or if she is willing to support him when he is released because she feels she put a lot of effort into trying to break the cycle of incarceration. She said she understands that it is more likely for her children to be sent to prison, because she did, but she hoped her children would break the statistic. 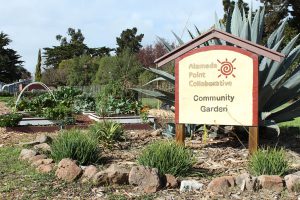 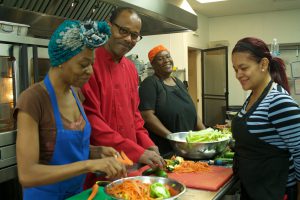 Above are pictures of the community garden and kitchen where the residents of APC grow and cook the food that they serve at our events.

Many of these individuals have been incarcerated for drug offenses. There are strong genetic links and environmental factors that influence drug use. The children of parents who have drug or alcohol addictions often begin their lives with a hereditary vulnerability in addition to the impact of their parent’s drug addiction. Additionally, the loss of parental role models for long periods of time during a parent’s absence due to imprisonment negatively impacts breaking the cycle of incarceration. I recently read an article about recent research that proposes that 40%-70% of people in the prison system have Antisocial Personality Disorder (APD) which the researchers contest has a strong genetic link, further adding to the cycle of incarceration.

In Professor Fried’s course I learned about the unfairness of U.S. drug laws and the impact they have on the cycle of incarceration. With this knowledge, I am more informed about the challenges facing individuals who were incarcerated, especially the difficulties encountered in breaking the cycle of incarceration. My role at the Open Source Wellness program, is to help run the weekly event by facilitating a group discussion in a weekly women’s circle. I feel as though my increased understanding of incarceration in the U.S. is helping me support these women in a way that is meaningful and helpful to them.