In the spring 2017 semester, I took a class called “Rock and Roll in American Culture.” In this class, I learned about how social movements have influenced rock and how rock has influenced social movements. For example, rock music and rock musicians played a big role in the Civil Rights Movement, as well as the Anti-Vietnam War Movement. To my surprise, this is a parallel to the organization I’m interning with, To Write Love On Her Arms (TWLOHA).

TWLOHA began eleven years ago when the organization’s founder sold t-shirts at a rock show to help pay for a friend’s rehabilitative treatment. The vocalist of the band playing that show noticed the t-shirts, emblazoned with what would become TWLOHA’s logo, and wanted to wear one of them while performing on stage. Overnight, hundreds of people sent in messages to the TWLOHA MySpace page. Soon after, TWLOHA joined Vans Warped Tour, a traveling music festival featuring mostly rock bands. Since then, TWLOHA has sold t-shirts, started conversations, and disseminated mental health resources at dozens of music festivals around the country, even expanding to other genres outside of rock. Many different musicians have worn TWLOHA t-shirts on stage, and a large portion of the people who know about the organization learned about it from these musicians. TWLOHA  is deeply connected to music, especially rock music, as a platform for social movement .

I experienced this connection firsthand, as I had the opportunity to work at the TWLOHA booth at Warped Tour in West Palm Beach, Florida. A band I like, Movements, performed while I was there. Before their set, they invited to the microphone a man who shared his struggles with addiction and urged people struggling with addiction to seek help. Later in the day from behind the booth, I could hear another band’s vocalist talking about how hard it is to have a loss of hope, trying to convince people struggling to stay alive, saying, “It’s okay to not be okay.” Hearing and seeing these musicians use their performances and popularity as a platform to promote social justice reminded me of what I learned in “Rock and Roll in American Culture.” 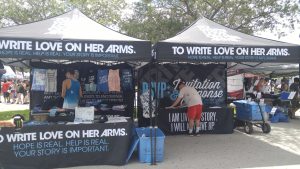 Recalling the discussions we had in this class, I was reminded of the power and importance of art as a method of promoting social justice. The moments I witnessed at Warped Tour are a few of many examples of art being a catalyst and platform for social change. This connection reminds me of TWLOHA’s roots in rock music and how music has catalyzed this organization’s ability to promote social change in mental health.