The Center for Health, Identity, Behavior and Prevention Studies primary social justice goal is to “improve the lives of those affected with or by HIV, substance abuse and mental health burdens through the rigorous application of social science and public health research paradigms.” CHIBPS is identified as “a leading HIV, substance abuse, and mental health, behavior research center that is focused on the well-being of all people including sexual, racial, ethnic and cultural minorities and other marginalized populations.”  While this goal sounds broad, its vastness allows CHIBPS to create research projects that are focused on wide ranging issues relevant to the communities we aim to serve. Currently, that includes studies of men who have sex with men, and a study of older HIV positive men who identify as gay.

As I hinted in my previous blog, CHIBPS recognizes the important role researchers play in furthering knowledge on issues of public health to better our cultural understanding of HIV, and to destigmatize the mainstream narratives which thus influences policy. However, one of the things that I find most challenging when attacking issues of social injustice from a research angle, is that researchers do not witness the immediate change and cannot influence or bias the results. In the context of our research projects, this means that we are not able to tell people that they should be changing their behavior to lower their risk of contracting or transmitting HIV. We can offer resources if they ask, but we cannot influence their behavior in any way. In addition, the American healthcare system is extremely complicated and bureaucratic. Therefore, policy or innovation moves rather slowly. Research, particularly on human subjects, is a lengthy and messy process. And it looks different depending on which study we are working on. 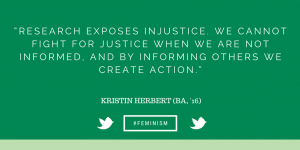 This summer, my role in the study of older HIV positive, gay identified men is centered primarily on study recruitment either online, in community centers or at Pride events around the city. The goal of this study is to understand how psychosocial factors such as homophobia, ageism, etc., impact the process of aging with HIV. Thus progress in this context looks like identifying those factors and understanding what it is like for the first generation of people who have aged with HIV as their life expectancy now matches the rest of the population. Progress in this context looks like deepening our knowledge of an older HIV positive gay man’s experience, in the hopes of both humanizing them and improving their quality of life.

In the longitudinal study that has been following young men who have sex with men in the New York metropolitan area, the goal is to understand the development of both maladaptive and adaptive behaviors and to further develop a theory of syndemic production of HIV. This would, again, further our knowledge of HIV to help improve HIV related policy and hopefully decrease the rate of transmission among men who have sex with men. My involvement in this study entails interviews of subjects surrounding their sexual behavior and substance use. The fact that this study is longitudinal implies that it is a long, evolving process. To summarize, the broad goal of our behavioral research is to find results that deepen our understanding of HIV, and lead to tangible progress for the communities we serve.