The early morning following the day that I submitted my first blog post, an earthquake happened in the northern area of Osaka City, a region right south to Kyoto. The magnitude 6.1 earthquake hit Osaka and Kyoto was significantly affected as well. Japan is known for frequent earthquakes, but it was my first time experiencing an earthquake at this level. The earthquake itself lasted approximately 30 seconds, and it took me about 10 seconds just to realize that it was an earthquake.

I was at home while the ground suddenly started “jumping” up and down, and then, moving horizontally. In fact, some of the lab members and I were planning on heading to Hiroshima for an annual genome editing conference at around noontime that day, but all available public transportation  in the region was completely stopped. I managed to get to the lab on foot as usual to meet up with the other members. I did not observe much panics from the faces of people passing by me on the streets. While the lab members were in the lab waiting for the updates on public transportation, we were even talking about staying over in the lab and leave for Hiroshima the next day as it was unknown when the transportation will return normal.

On the Platform of Hiroshima Railway Station 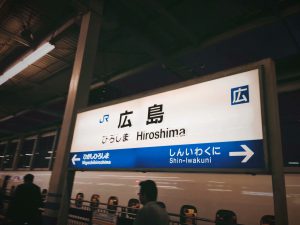 The Materials and My Name Tag for the Conference 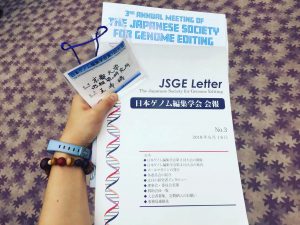 The earthquake was not the end of the story, a heavy and constant rainfall hit western Japan beginning on July 6th. Kamo River and Katsura River in Kyoto were severely flooded and so did many other rivers in western Japan, especially those in the south-western region. A significant numbers of people lost their lives due to the flood and the sequential sediment disaster. According to the news, it was the most devastating rainfall and flood since Japan entered the current era, “Heisei period,” which means it was the most severe flood on record in the past 30 years.

Flooded Kamo River Next to CiRA on July 6th 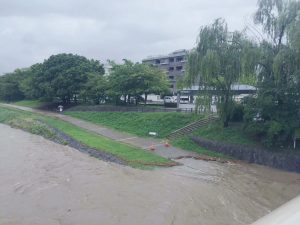 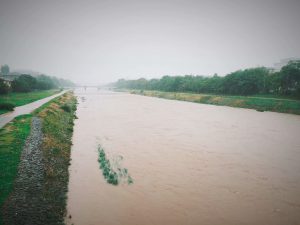 While I am writing this blog during this long weekend, the famous Gion Festival is going on just outside of the window despite of the record-breaking high temperature these two days.

Besides the busy laboratory work, all these unexpected or expected events have become the spice of a monotonous daily routine. Though I have felt the significant personal growth in a lot of dimensions because of the laboratory part of this experience, the other parts were also the essence. They certainly added diverse colors and flavors to this unique cross-cultural and cross-field internship experience.

For every day I am at work, I tried my best to enjoy and make the most out of it. Indeed, I started my independent works last week after only a month of “intensive training.” Still, I cannot believe that half of my internship has passed already. I am definitely going to miss my life here in Kyoto and at CiRA a lot.