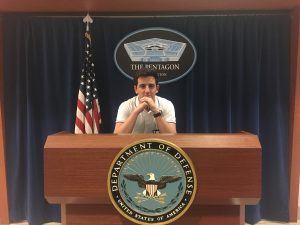 Dupont Circle is, in my opinion (and I am sure that the local lease rates would support this), arguably one of the best places to live in the city because it has the perfect balance of a residential neighborhood that is just a block or two away from a commercial district packed with bars, shops, eateries and more. Walking around is especially nice because the area is filled with an even mix of nice apartments and beautiful, lavish buildings which often serve as the embassy or ambassadorial residence for dozens of countries—case in point, I am a stone’s throw away from the embassies of Sierra Leone, Argentina and Georgia. Living in Dupont Circle this summer has definitely increased my affinity and desire to move to a similar sort of neighborhood when I start working full time in the near future, wherever that may be. Some metropolises in the world never sleep, and DC may have its rush hour times, but I have come to appreciate the natural ebb and flow of human traffic in the city. Also, I am extremely grateful to have had the opportunity to live at the International Students House in DC since in addition to being a six-minute walk from work, I made several friendships there that I am sure will last a lifetime.

At work, I have really enjoyed the process of familiarizing myself with the various writers, thinkers and biases present in the Russian media and I definitely feel like my understanding of Russia has deepened considerably since the start of my internship. I should also mention that I am a huge fan of the two highly nutritious “five-star meals” that AEI serves each day (I basically won the lottery when it comes to saving food on meals during the week). I also really love the overall ambiance and overall character of the think tank world.

The “World of Work” is a different universe altogether when compared to university life. It is much easier to settle into a consistent rhythm when you have the same 9-5 schedule five days a week as opposed to a variety of different classes interspersed throughout the week, with gaps in between for additional work. I think another major difference between university and real world life is that in a classroom setting, you are given a set of standards to meet—the technical term for that is a syllabus. In the real world, you have to make your own syllabus because after the initial training period is over, you’re on your own and people expect results regardless. This position has been far from easy, but ultimately, it has significantly enhanced my Russian reading comprehension skills, as well as my general understanding of Russian society and politics. Finally, the networking potential that I have gained just by being here for the summer is unbelievable, and I have already begun meeting with relevant connected people in the field while also cultivating a list of possible future employers.