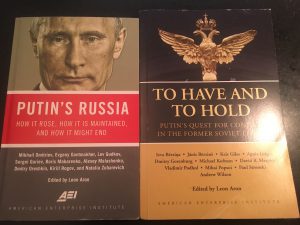 This internship has definitely helped clarify my career interests as I now know that I really enjoy working in a think tank environment (especially AEI) because the notion of coming to work every day just to think about researching, analyzing or solving big problems in the world is a pretty appealing job description. I also learned that with limited guidance, as long as I take the proper time to reframe things in my own words, I can be very successful in the long run.

Case in point, I had little to no guidance at the beginning of my internship (which also happened to be when I saw the most of my scholar). In other words, for the first two weeks (before he left for his three-week trip), most of our interactions revolved around him critiquing the Daily Packets of 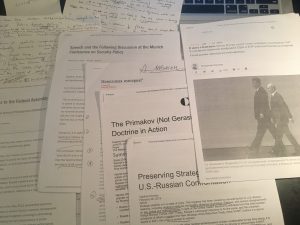 political analysis that I was handing in, which continued to be subpar, because I had no idea what I was doing at that point in time. But, improving at anything is an iterative process, and this experience was exactly that. While he was away, I took his criticism to heart and used it to shape the rest of my work going forward, being mindful of where I had messed up earlier. To cap this process off, I wrote a 30-page intern on-boarding manual which I presented to him upon his return from his travels. I would definitely say I am most proud of the manual because it was the result of several iterations of synthesizing my scholar’s comments into one comprehensive guide for future interns.

My learning goals definitely changed from what I had originally set out to achieve since I did not end up speaking nearly as much Russian at work as I would have hoped since my scholar was seldom in the office and the Research Assistant who supervised me was equally busy.  Luckily, I was able to practice in the evenings since there was a girl from Moscow living at the International Student’s House, so while I did not meet my language practice goals head on, at least they were not neglected completely. Case in point, midway through the summer, I refocused my efforts on honing my reading comprehension skills in Russian.

For students interested in an internship at AEI be prepared to be thrust into an extremely intellectual environment. You will join a cohort of bright and talented peers from some of the best colleges and universities in the US, each person impressive in their own right. If you are willing to work hard, accept criticism and learn from it, you’ll be golden. As far as advice goes for those in my field, to the select few who would like to follow in my footsteps, if you can acquire a good command of the Russian language and familiarize yourself with the major American and Russian writers and thinkers who are writing about Russia, you will put yourself on the path to success.