A fundamental idea in my environmental studies education at Brandeis is that environmental issues do not occur in a vacuum. Rather, they are intimately connected to our world’s social, economic, and political challenges. Too often, environmental advocacy approaches climate change and habitat degradation solely through the lens of biodiversity loss, or the potential for extinction of plant and animal life. While this is important to consider, and we must make an effort to conserve and protect our planet’s valuable wildlife, environmental movements must also take human rights and social justice into account.

In the Fall of 2020, I took a Brandeis course titled “Nature, Culture, Power” (ANTH 151b), taught by Professor Richard Schroeder. This class offered an overview of a niche field of anthropology–political ecology–which studies how political and historical dynamics inform human relationships with nature. Each week introduced a different topic of political ecology, reinforced by case studies. One of these cases assessed conservation in protected areas, including national parks and nature preserves, specifically questioning how the protection of wildlife can interfere with human rights. We read about and debated the controversial “shoot to kill” policies in Kruger National Park in South Africa, in which the government encouraged conservation officials to shoot individuals caught poaching endangered species. Traditionally, environmentalists would argue that the wellbeing of wildlife in the national parks should not be compromised. Poaching often only occurs when political and economic circumstances restrict the livelihood opportunities afforded to local populations.

I was exposed to a similar dynamic the following semester while studying abroad in Cambodia. During the program, my classmates and I took a field trip to the rural providence of Preah Vihear, where we visited a nature preserve in Cambodia’s rainforest. While interviewing park rangers, we learned that armed conflicts sometimes broke out between conservation officials and local populations. Due to civil war, colonialism, and oppressive governance, local communities are restricted to low-paying agricultural professions and many families live in debt. Therefore, trapping and poaching wildlife, which can be sold for large profits to alleviate their economic hardships, is a common strategy, despite its illegality. Environmental activists advocating for the protection of Cambodia’s rainforest habitats and its native wildlife loudly oppose the local populations’ poaching from the parklands. However, with limited economic opportunity, conservation becomes more ethically complicated. It is impossible to make environmental policies without considering the socio-economic factors that lead to poaching. 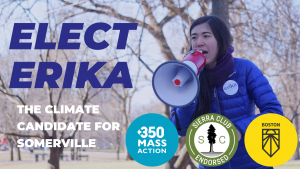 This balance between environmental protection and social justice that I have studied in the classroom and in the field directly informs the work I am doing with Sierra Club this summer. As a political intern working for Erika Uyterhoeven, a progressive candidate for State Representative in Somerville, I have had the opportunity to organize for her campaign by recruiting volunteers, fundraising, and helping to craft aspects of her campaign strategy.

One of her top priorities, if elected to office, is the passage of a Green New Deal for Massachusetts. The Green New Deal is a broad piece of legislation that involves transitioning Massachusetts to 100% renewable energy, expanding access to clean public transportation, building green, affordable housing units, and creating new, union jobs in sustainable industries. While it primarily focuses on mitigating and reducing the impacts of climate change, the Green New Deal is holistic, ensuring that public health, economic justice, and human rights are centered as well. Advocates for the Green New Deal recognize that environmentalism and the conservation of wildlife and their habitats do not go far enough on their own. Environmental policy must take into account environmental racism and the disproportionate impact that climate change will have on communities of color, Native peoples, low-income populations, and migrants. Simply passing policies that protect our planet without protecting people fails to recognize the underlying political and economic causes of the climate crisis we are now facing. While policy makers must take decisive action to defend ecosystems and the species that inhabit them, this cannot come at the expense of people’s livelihoods and wellbeing, especially for our most vulnerable populations.

Learning about instances where environmental stewardship and human rights were at odds with one another has informed my experience this summer by highlighting the importance of advocating for candidates and policies that find a balance between these issues. Sierra Club and Erika’s campaign have deepened my understanding of the interconnectedness of the environment with social justice.