Power in Place is a nonprofit organization focused on highlighting women in American politics through academic writing, interviews, podcasts, visual art, spoken word poems, and other forms of advocacy. PiP was founded in 2015 by professional photographer Katrina Hajagos in response to the lack of women–especially women of color–in political office. Only 23.7% of women hold a congressional office and only 37% of those women are women of color. The goal of PiP is to emphasize the lack of women in politics and to inspire the next generation of young women to find their voice and their place in American politics.

As a woman and a woman of color myself, I have often wondered how I could best serve my adoptive country. I was not born on American soil, so the presidency is out of the question. I could pursue a place in office in politics or continue my education into law school. Either way, I want a place in politics. As I entered my junior year at Brandeis, I looked for ways I could begin to enter the realm of politics, and the nonprofit Power in Place was perfect for me. Power in Place allows me to begin understanding politics in the field, and helps me develop skills in research, writing, and management.

As of 2021, Power in Place has 120 student collaborators from all over the country. There are 17 sections (or “teams”) of the organization that an intern can choose from. Sections include grant-writing, website design and accessibility, podcasting, in-house graphic design, and more. In addition to being assigned a team, students will individually choose an elected official from their home state to interview and conduct a photoshoot.

I was designated as a project manager for the virtual time capsule team and as a member of the graphic design team. The virtual time capsule is a long-term summer project where collaborators are working to create a virtual artistic timeline that tells the story of the suffragette and feminist movements starting in its early stages of the 1800s to the modern day fight for women’s equality in the 21st century. As the project manager for this team, I will be conducting and overseeing research, holding team meetings, and serving as a liaison for our boss, Katrina. So far we have conducted research on the women’s suffrage movement starting in the 1800s and on the early days of second-wave feminism in the 1960s. 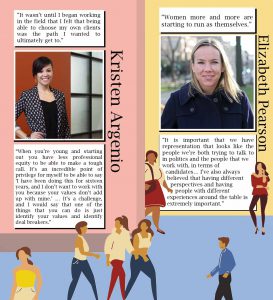 The graphic design team is focused on helping out all other teams with any art or graphics needed. For example, our boss is looking to have a new logo created for Power in Place. Our team has been working on making a new logo that is more modern-looking and representative of the organization. In addition, the team is creating “baseball cards” for the highlighted women we are interviewing and for historical figures.