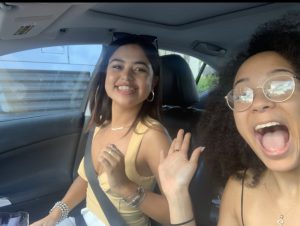 (This is a photo of me and Legislator Gerardo together)

The organization I will be working for this summer is the office of legislator Oriana Gerardo, the youngest female to hold office in the municipality of Yauco, Puerto Rico. I will be working with her to develop projects for her constituents. Legislator Gerardo’s mission is to provide programs for the people that elected her that will help them in their everyday lives and represent their needs to the larger government on the island. I will specifically be working to develop a program called “Arts for All”. It is an outreach into the artistic community of Yauco to provide artists with the space and encouragement to create with the goal of collecting resources and raising awareness for various causes like cleaning up the beaches, moving towards more sustainable resources, recruiting more women into politics. Throughout the summer, we will be drafting proposals and building the program’s framework. The goal is to propose the fully mapped out program to the committee at the end of the summer. In addition I will be reaching out to artists and essentially brainstorming projects with them that will promote social awareness and change.

During my first month as an intern with Legislator Gerardo. I learned that in her municipality in Puerto Rico she handles more of the budget rather than actual law making. I have begun to speak to different artists in Yauco, PR and asking them about political issues they are passionate about. Many of the artists have expressed their desire to become a state and have their voices properly accounted for in the U.S. government. In addition they are very passionate about keeping the environment clean and are concerned about climate change. With all of the natural disasters that Puerto Rico has endured in the last few years, it is vital that as a community they do not contribute to worsening global conditions. Many artists have pushed for companies to reduce their carbon footprint and Co2 emissions. I have begun to ask if they would be interested in integrating their political views into their art. So far, I have gotten mixed reactions where some artists are hesitant because they feel they want their art to reach and spread to everyone and are afraid of having political dissenters deem their art “too political”. However there are artists that are interested in integrating their political opinions into their art and others that are interested in using their artistic talents to raise money to support political campaigns that align with their views.

This past month I have learned a lot about Puerto Rico’s politics and I have been spending a lot of time with Legislator Gerardo and learning about her role in her municipal government. It is an amazing opportunity because she is the youngest female legislator in her district and maybe in Puerto Rico as a whole. I am very excited to start this out reach program and learn more about the politics of Puerto Rico.